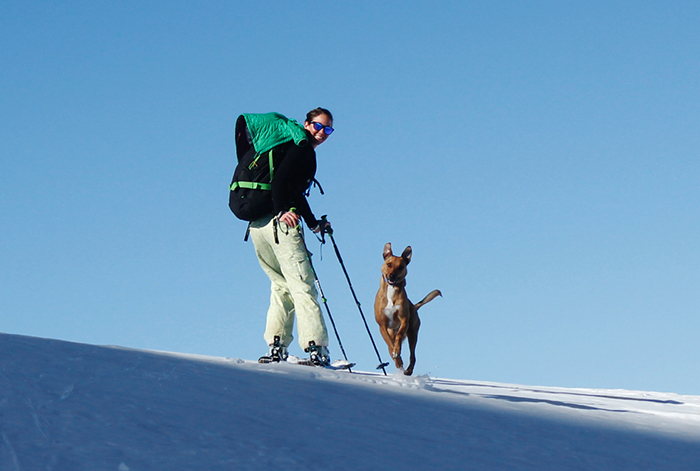 8 things to consider before backcountry skiing with your dog 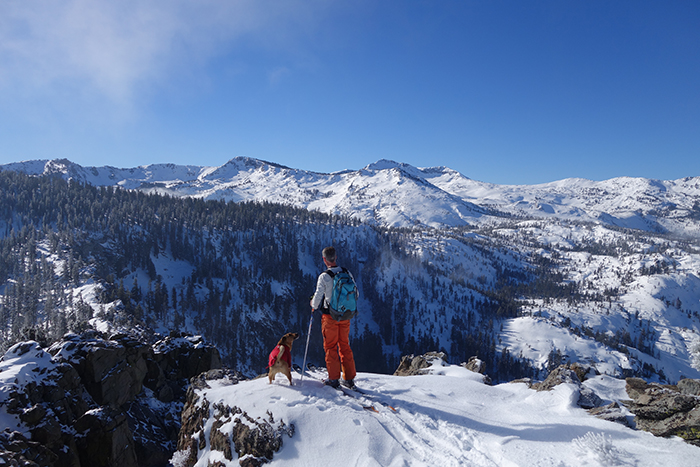 Nacho enjoys the rewards of the climb as much as his human. View: Desolation Wilderness from Maggie’s Peak (Jeff Glass).

They say that a dog is man’s best friend. And what’s better than a day in the backcountry with your best friend? All my life I had been a cat lover until I skied with Buddy, a friend’s dog who excelled in the backcountry. I knew right then that was what I wanted. Fast forward two years to November 2012 when I adopted six month old “Nacho” from the South Lake Tahoe Animal Shelter.

Nacho is a Whippet/Aussie/Sheltie mix which means he’s “fast and furrious” – something I learned our first day out pre-season at Alpine Meadows. For the first two years this speed was something of an issue since his behavior wasn’t always the best. He has taken out several ski partners whose only crime was shralping the pow. Afterwards he sat over them gloating as if he saved all the fresh tracks for me.

Humor aside, working with your dog to help him be a safe companion out in the snow is an important undertaking. We were lucky to escape incidents unscathed, but I’ve heard stories of those not so fortunate. Without a doubt, skiing with your pup can be one of the most rewarding things you can do for both of you, but it’s not something you can take lightly, since in addition to ensuring his or her behavior is appropriate around others, you’re responsible for his safety out there. There are a myriad of threats we all face whenever we enter the backcountry. Some of these threats are exacerbated and new ones are added when your canine friend is added to the mix.

Before you even don your skins, your plan for the day has to include your dog. Following are a few things to consider; some will obviously be more of an issue with some dogs more than others.

1 – Your dog’s claws will give him excellent traction moving up icy slopes. Coming down the same slope in the same conditions the claws are no help and stopping could be impossible if the slope is steep. I once had to back out of the top of Carnell’s in the Cirque at Kirkwood for this very reason.

2 – Avalanche assessment has to take your pooch into consideration. If he is the type that could run off in a situation when you need him to stay at your side — such as near cornices or areas under a slope that could release a slide remotely — you should consider leaving him at home for the day.

3 – Some dog breeds do better in extreme weather than others. The day’s weather is something I have to pay special attention to as Nacho does well in the snow, but is not a breed naturally designed for it. Colder temps (and especially winds) can get him shivering and send us home early. Fortunately Sierra temperatures stay relatively mild, and a jacket – although no substitute for Husky fur! – keeps him comfortable on the colder days. It’s important to note that a dog’s paw can become stuck inside the jacket which can completely immobilize him in deep snow. It might be best to let your dog wear a jacket only on the uphill.

4 – Snow conditions definitely play a role in your dog’s safety as well as enjoyment. Early season conditions can mean your dog’s paws are busting through to whatever is hiding a foot under the snow, and it is often sharp. Similarly, a breakable crust could be easy for your Corgi to negotiate while a 24″ cold smoke powder day could be permanently over his head. That same breakable crust could wreak havoc on those with smaller paws. Booties are available for dogs and although I have never seen an active dog keep his boots on for more than 30 seconds, they may be worth trying out if you have concerns about your dog’s paws.

5 – Are dogs allowed? Regardless of how you feel about a certain area’s policy regarding dogs, you should know the fines for having your best friend with you can be extremely punitive. I once received a “dog off leash” citation in an empty D.L. Bliss State Park during the winter that ended up being a $500 fine. The ranger pointed out that I was cited for only one out of four possible citations, as I had two dogs off leash and they’re not allowed on the beach even on leash.

6 – Like their human counterparts, dogs get injured in the backcountry. The most common injury is caused by our skis slicing their tendons when they get too close. Some dogs are better than others at staying a safe distance, but it’s an interaction between both the skier and pup so the skier’s ability comes into play as well. What will you do if Fido gets injured when you’re five miles out? It is important to have a first aid kit with you whenever you enter the backcountry. Fortunately, if you already have a first aid kit for yourself there is no reason to carry an extra one for your dog since the kits are all virtually the same.

7 – Be sure to consider your dog’s water and food needs. I can’t get Nacho to drink on ski tours. It’s never hot and they constantly eat snow. Your dog might be different however. Collapsible bowls are light and take up very little space.

8 – Is your pup old enough? It’s imperative that your pup be appropriately developed before you push him too hard, especially in deeper snow. The proper age varies greatly by breed so it’s a good idea to do some research, and start off with smaller tours.

While all that seems like a lot to think about, it rarely stops us from enjoying the backcountry, though it sometimes changes our plans. Nacho consistently manages to get over a hundred days in and it looks like this year will be the same. 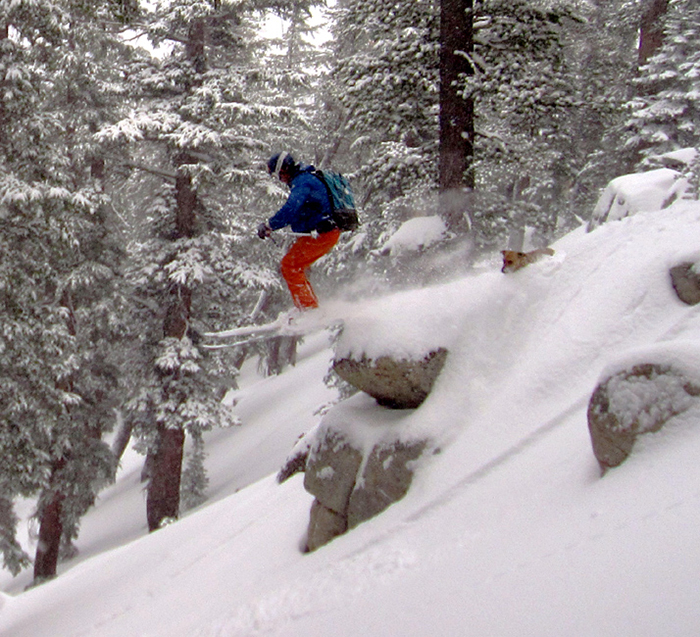 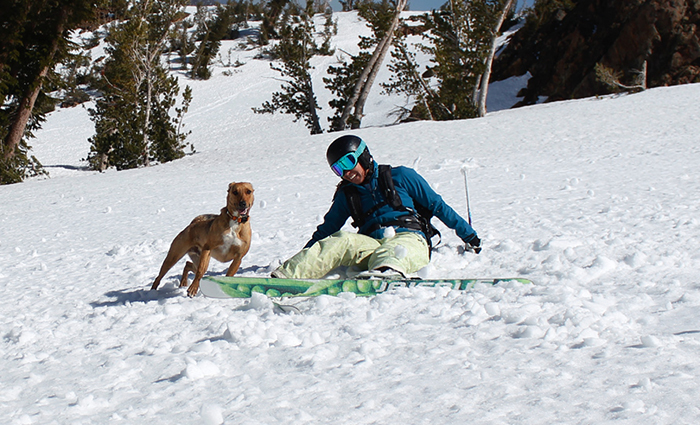 As a backcountry partner Nacho is always at your side and the first on scene with kisses after a crash (Contributed). 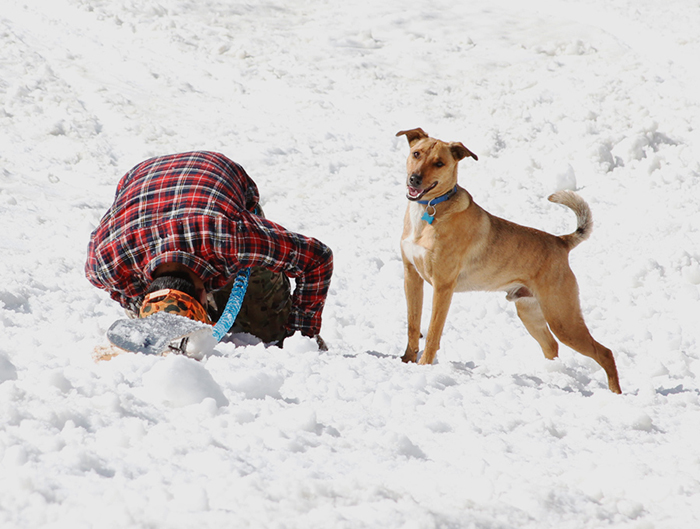 On standby for more kisses (Contributed). 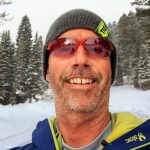 Court Brock spends every day climbing, skiing and/or biking in the Sierra with Nacho and his furry pals (Stoke and Whiskey). Follow Nacho on Facebook (Facebook.com/Nachothewonderpup) and Instagram (@climbskibikedog). 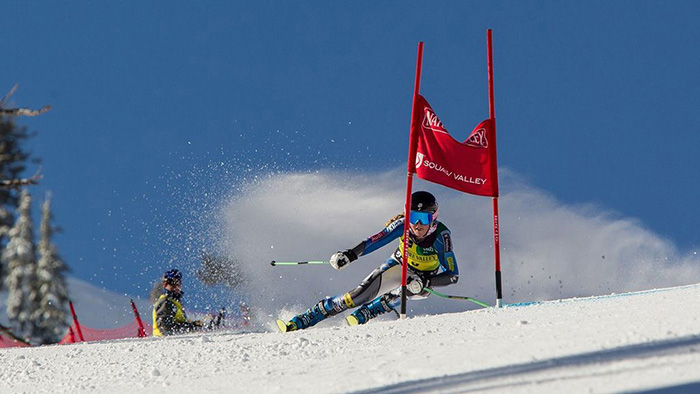 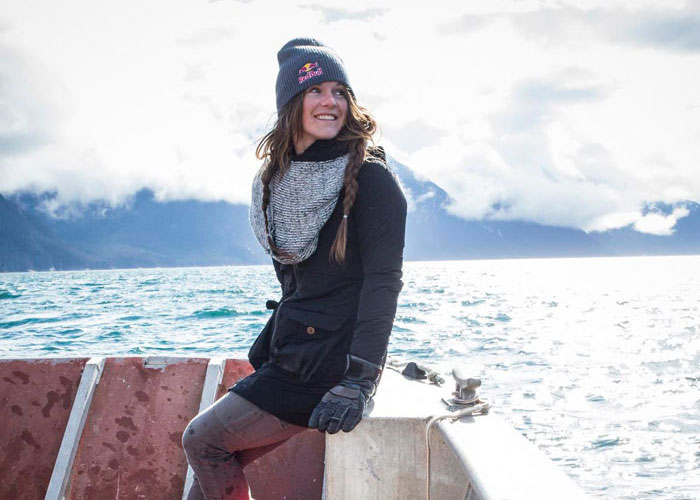 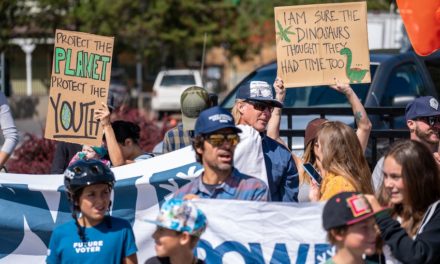 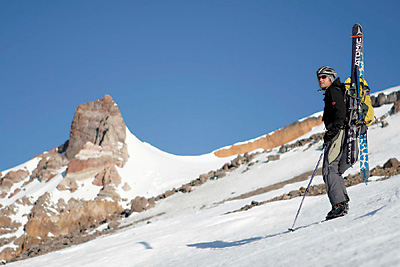