From a kayak, writer overcomes jaded view of Tahoe as mere tourist trap

Ever since I first saw Lake Tahoe I have considered it a sacrifice zone. A glorified strip mall where over-fed tourists come to gamble away their disposable income and flaunt their coordinated ski outfits. A hive of casinos and palatial mansions, roads crawling with RVs, water congested with powerboats. A backdrop for the same vacation photo taken by millions of visitors who never stray further than a half mile from their vehicles.

Until I dragged a kayak into the startling clear waters one sunset in June. My partner and I envisioned a sunset paddle and full moon rise before making camp. We left Santa Cruz hours later than anticipated, and rather than sleep in the car and wait for morning we bravely pushed off into the fading day.

Once our giddy excitement mellowed and our nervous chatter tapered off, Adam and I were embraced by the stillness of the lake. Casinos and hotels slipped by, mute from a distance. The far-off hum of engines and roads melted into an evening chorus of birds and the gentle slapping of our paddle strokes. The sun splashed vivid colors across the sky, reflected in subdued orange and lavender all around us.

And we realized that in order to truly appreciate the vast alpine jewel that is Lake Tahoe, you must get on the water. At lake level, every puff of wind means a gentle swell; the mirror stillness reflects snow-capped mountains and your paddle strokes send ripples through the sky. Only in a kayak can you drop into the tranquility and clarity that makes Lake Tahoe a place of magic. And only by a complete circumnavigation can you get a sense of the scale of this place, the largest alpine lake in the country.

Lake Tahoe has 72 miles of shoreline, and is surrounded by national forest. The edge of the lake features white sand beaches, soaring cliffs, and mirror calm bays. There are little towns and lakefront bars scattered around the circumference. A kayak circumnavigation allows you to choose your own adventure; you can stay in a hotel and eat out every night, or sleep under the stars and hike through seldom visited state parks.

Kayaking on Lake Tahoe is a low stakes game. There are no monster tides and no significant waves. With 250 sunny days a year, you needn’t suffer the climactic hardships that plague other choice locales, like Glacier Bay. Kayaking fresh water means no salty eyes, no crusty clothes and a freshly washed face every morning. This is a perfect beginner kayak camping trip; in fact Adam had only kayaked once before.

When night squeezed the last light from the sky, we were faced with an inky blackness softened only by the reflections of shore lights on the edge of the lake. Within an hour, the moon began to rise over trees, bathing us in silvery light and sending mercurial ripples in all directions. The glittering lights of development and human clutter slid by and we agreed that casinos look best at night, from a silent distance.

We kayaked for hours in the breathless calm of night, mesmerized by the endless variety of reflections moonlight casts on water, until one of us began to get tired and we realized we had no idea where we could pull out for the evening.

Not all shorelines are created equal. Some are inviting sandy stretches and some are boulder-strewn obstacle courses. We honed our maneuvering abilities at 11 PM in utter darkness. Our pace slowed to a crawl and we navigated by echo-location, retreating from the violent slaps of waves against submerged rocks. Finally gentle watery murmurs lured us to shore. We stepped up to our mid-thighs in the icy lake, doused ourselves in drips, and gratefully heaved our boats onto what daylight revealed to be the only strip of sand for miles in either direction.

We swore we would faithfully trace the shoreline, exploring every rocky cove and burbling stream. After only an hour the novelty wore a bit thin. We soon became entranced with the tranquility of cruising across bays, the stillness and glide and simple elegance of our boats, as well as the pleasure of avoiding the more populated beaches. We savored the ever-evolving perspective on distant passing houses, trees and mountains.

Carnelian Bay was our longest crossing, perhaps four miles. We paddled through great swirls of pollen, and paused after an hour or so to sip water and enjoy snacks. Adam pulled out an iPod with portable speakers, wrapped it in a plastic bag and strapped it to his boat. Old School Freight Train provided the soundtrack to our stunning traverse. And then I ran headlong into the ultimate bummer of kayaking and my significant handicap as a woman.

I had to pee. Worse than ever before in my life. And short of soiling myself there was no relief in sight. Adam fared no better, though conversations with experienced kayakers reveal that men often rig up a simple pee jar and dump it over the side. Adam and I had no such respite and we struggled onwards in agony. We set our sights on a small copse of trees and imperceptibly they began to get larger. I have never been so grateful for the act of urination and will always take this into account on future kayak trips.

We queried locals about the best food in Tahoe City and enjoyed a raucous meal of fish tacos and generous margaritas at the Blue Agave. Darkness found us too buzzed and giddy to kayak further and we sacked out in a city park for the evening, rising early to avoid any earnest rangers. We were just a few miles from the scene of our crime when I heard a snap and lost the ability to steer my boat.

Once in Southeast Alaska, my rudder cable snapped and it took the determined efforts of three experienced kayakers to save my life as tides and waves threatened to drown me in the Lynn Canal. But on Lake Tahoe one of the worst accidents that can befall a kayaker was no big deal. I simply pulled up my rudder and paddled for shore. The caretaker of the property where we landed fished out some baling wire and clamps and we rigged a stable solution that served admirably for the remainder of our journey.

On our last day we ran into our first fellow circumnavigator, paddling in the opposite direction. He told us this was a yearly spring-summer ritual for him, and he had done it five times with five different folks.
“I decided to just go solo this year,” he shrugged. “I always have eager takers, but never a return customer.”
Maybe he kayaks too fast and people don’t enjoy his pace. Maybe he’s not great company. Maybe some people decide kayaking is not for them. But maybe, like Adam and I, all his eager takers leave awestruck and satisfied, like they came to know and understand a place in a profoundly intimate way. But their next adventure will allow them the freedom to pee whenever and wherever they want.

Though self-defense instructor and writer Leonie Sherman will probably not make a kayak circumnavigation of Lake Tahoe an annual ritual, she is passionately in love with the American West, in particular the Sierra Nevada. She’s always on the lookout for experienced and, more importantly, eager backcountry companions. 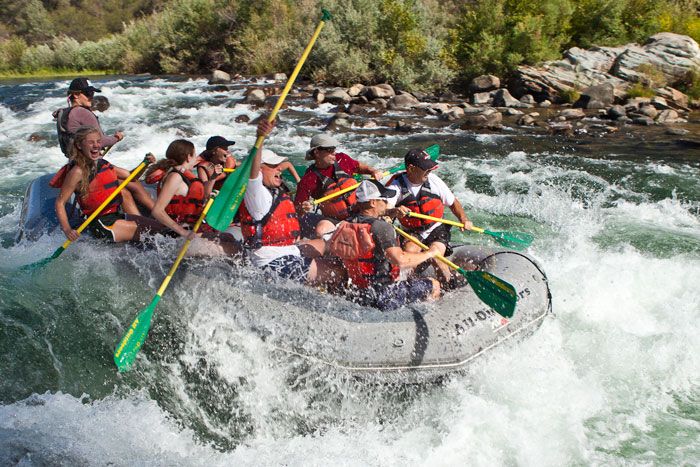 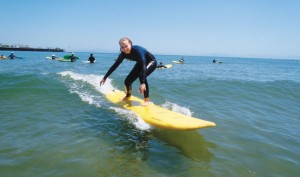