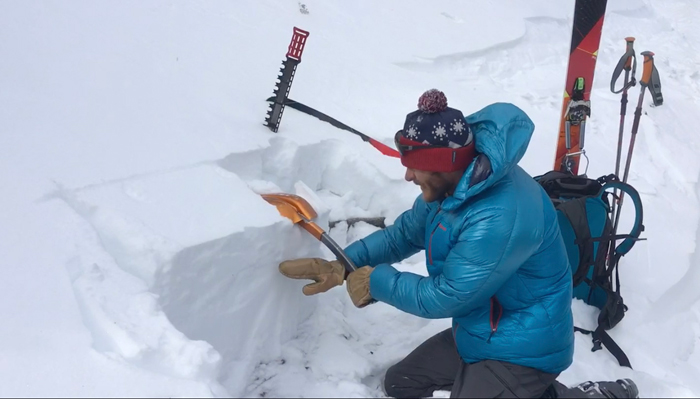 Josh Feinberg, one of ESAC’s three forecasters, tests the sensitivity of a recently deposited snow layer with an Extended Column Test (ESAC).

Veteran ski patroller Josh Feinberg didn’t really understand avalanches until he triggered one that killed a close friend. While backcountry skiing north of Yosemite, he and two companions, all well-versed in avalanche safety, decided they needed to traverse a wind-loaded ridge. The avalanche Feinberg started knocked him unconscious before completely burying him. One of his companions was swept through trees and rocks and the other clung to a small whitebark pine while the wave of snow flowed over him. After the dust had settled, the tree hugger retrieved the woman who’d been swept through the trees before digging Feinberg out. He left her in Feinberg’s care while he skied out to initiate a rescue. She died in his arms.

“That was by far the worst day of my life,” says Feinberg quietly. “After that, I just wanted to do whatever I could to help others avoid a similar tragedy.”  The next season, Feinberg started working for the Eastern Sierra Avalanche Center (ESAC), a grassroots, community-funded non-profit whose only goal is to provide information to backcountry skiers so they can make safe decisions in avalanche terrain.

Founded in 2005, ESAC collects data on snow conditions for the most popular backcountry ski areas in the Eastern Sierra. Its crew typically patrols an area that spans over 80 miles of Sierra crest, from Virginia Lakes to South Lake. In big snow years, like last season, they cover terrain from northern Yosemite to the Whitney zone. ESAC advisory warnings and outreach efforts save lives and ultimately save money by reducing Search and Rescue operations.

But avalanche study, by its very nature, is mired in tragedy. Just a year after ESAC issued its first advisory, one of the founders died trying to rescue two others who had fallen into a fumarole outside of Mammoth. “Walt Rosenthal was not only incredibly well respected in the local community, but he was also an incredibly astute, brilliant guy,” explains co-founder Nate Greenberg. “He had this amazing ability to process huge amounts of data and balance hard science with wisdom and grace. Losing him was a huge blow.”

Rosenthal continued to guide ESAC’s growth and development after he passed. “A lot of times, in those early days, when we’d be making a big decision about where we were headed or how to handle a situation, we’d ask ourselves ‘What Would Walt Do?,’” admits Greenberg. Rosenthal is still listed as President in Memoriam on their web page. He’d be proud of the organization’s growth and the work it carries out in his memory.

For its first decade, ESAC worked in conjunction with the National Forest Service, and issued three advisories a week with a bare bones staff of one or two forecasters. This year it’s expanded to three forecasters, who spend about 60% of their time in the field and 40% of their time in the office. The goal is to issue a daily top-quality advisory with danger assessments for the entire season.

The length of that season is increasingly unpredictable because of the widely fluctuating weather patterns brought on by climate change. In the past five years California has experienced the driest year on record as well as the wettest; warming temperatures mean more of the precipitation falls as rain. These huge swings make funding unstable, as donations decline when it doesn’t snow.

Three years ago ESAC split from the Forest Service and began operating independently. The board is all volunteer and most of ESAC’s operating budget comes from community contributions, including a seasonal kick off event that includes daytime seminars and a big evening shindig. This year the organization raised $20,000, almost a third of its annual budget, in a single day. It also receives some support from foundations, Inyo County and the town of Mammoth Lakes.

“One valuable thing about being independent is that we can all fundraise,” says Greenberg. “We are a small collaborative team and painfully aware of the budget. As a result, our forecasters are some of our best fundraisers!”

Though locals are ESAC’s biggest contributors, people from out of town may benefit most from its advisories. The alpine vistas, abundant hot springs, epic spring corn and vast terrain of the Eastern Sierra are within a day’s drive for millions of people who lack the intimate knowledge of storm systems and snowpack that local backcountry skiers accumulate over the season. ESAC’s advisories are a critical tool for coastal ski bums.

To cover so much terrain with such detailed reports, ESAC relies on not only their three paid forecasters but an extensive network of trained observers and enthusiastic backcountry skiers. Recruiting and training locals generates enthusiasm for backcountry travel and loyalty from the community. It also attracts world class skiers and forecasters to the tiny organization.

Doug Lewis began as lead forecaster for ESAC three years ago. He fell in love with winter and snow as a child, walking home alone in a snow storm and marveling at the hushed stillness and magic of fat flakes falling from the sky. He’s devoted 25 years to studying snow, teaching and working in avalanche conditions as a guide and forecaster, from Antarctica to Alaska.

“I love working with ESAC, because we are really driven by the backcountry community,” explains Lewis. “There’s a lot more direct contact with folks than when I was working for the Department of Transportation in Valdez, Alaska, for example. And we get to tell folks about where snow conditions are good, not just where to avoid. We really encourage folks to get out there and develop their relationship with these mountains.”

Forecaster Clancy Nelson grew up in Mammoth. He left for school but his love of the Sierra brought him back. He started volunteering with ESAC as an observer in 2007, while working ski patrol for Mammoth Mountain. “Nowhere else has terrain like this, that’s so accessible and this empty, really,” he explains. “I remember teaching a forecasting class in Jackson Hole where we spent a lot of time looking at maps and talking about how weather rolled over various ranges in Colorado or the Wind River or Bridger Range. Then I pointed out California and the Sierra and everyone was just amazed. I mean, this range is 400 miles long and there’s hardly anyone skiing in the backcountry.”

Though a forecaster’s work is grounded in hard science and data collection, Feinberg believes learning to assess avalanche danger is as much about self-awareness as deciphering snow pack. “Understanding conditions is really important, but understanding yourself and your personal motivation for being out there is even more important,” he explains.

“When people are really goal-driven, it’s easy to look for what you want to see and rationalize to justify sketchy decisions,” he continues. “Snow sports involve varying levels of risk tolerance. You see people in a snowboard park doing huge jumps and triple back flips. For some people that’s insane, but if you have a certain skill level it’s totally reasonable. Backcountry skills are quite different,” he concludes. “When it comes to avalanches we’re talking about conditions beyond your control.  Physical skills are a small part, understanding the snow is a much more important part, but the biggest part is putting your desires aside for a moment so you can make a rational decision based on what you’re looking at.” 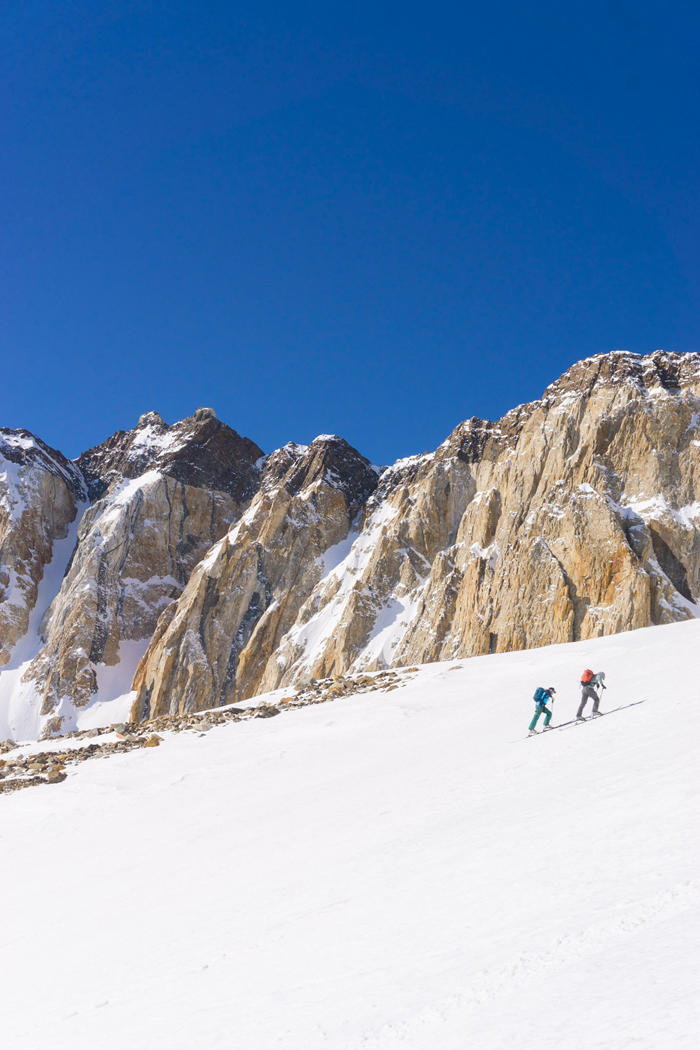 Brett Lotz and Andres Soleman skin up the South Face of Split Mountain with Cardinal Peak in the background (Nate Greenberg). 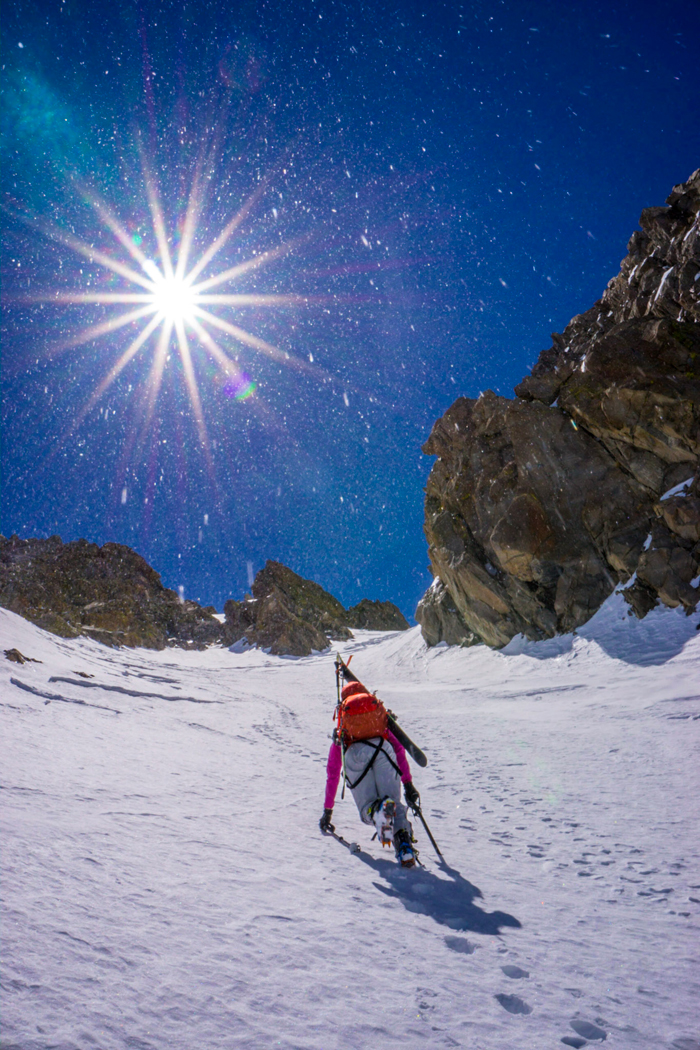 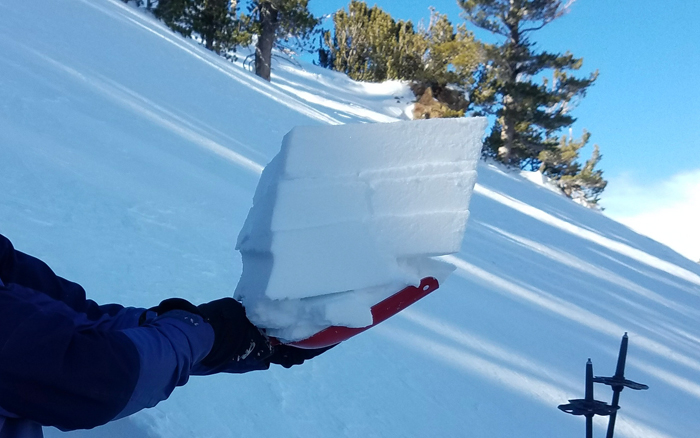 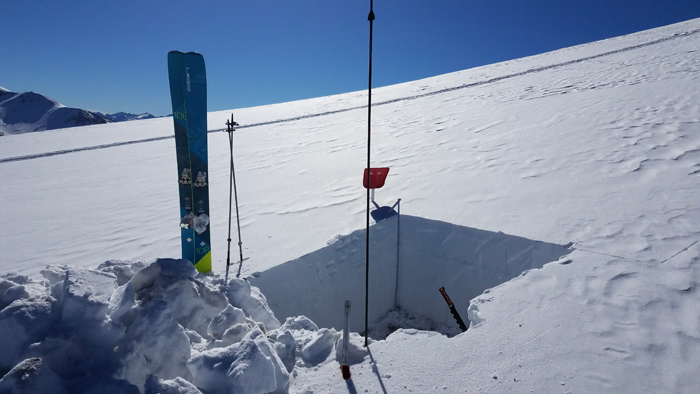 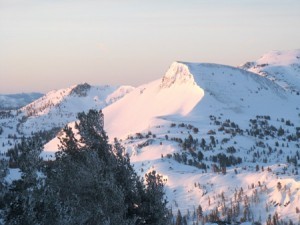 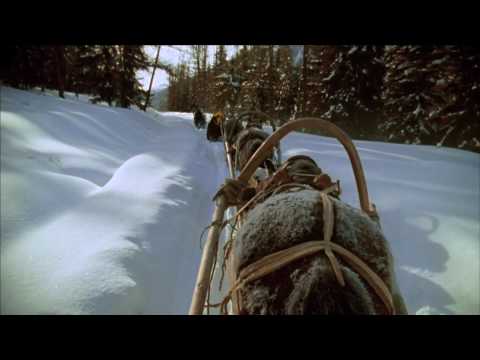 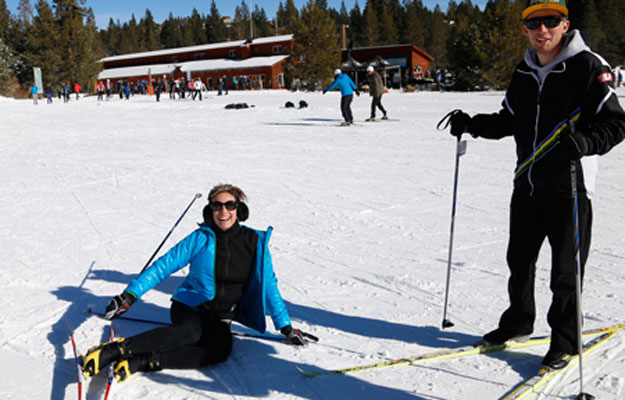