Heidi’s Climb: In the Alps, life metaphors roll easier than the miles for a cancer fighter striving to live in the moment 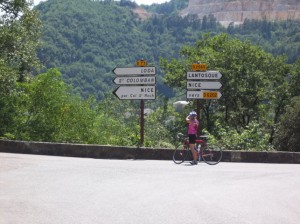 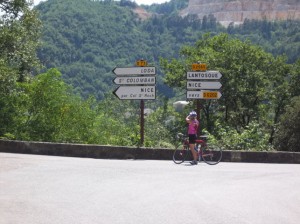 I found the world of sports late in life. It wasn’t until I turned 30 that I decided I would take a more active path. I was tired of making decisions based on fear of the unknown.
Little did I know that a year later that new life direction would be put dramatically and direly to the test when I was diagnosed with blood cancer.

Over the past 11 years, this up-and-down fight has opened me up to some amazing experiences. All I had ever done physically before was run to clear my head; now I’ve run marathons and Ironman triathlons. Deciding not to let fear stop me has brought me head on to a life that is incredibly full and beautiful whether it’s grinding out the miles on a bike, running trails or churning through water.

Certain moments stand out, though, such as a couple years ago when doubts began to creep in during a cycling trip in Europe.

In July of 2010, I found myself on a plane bound for adventure — to ride the famous passes of the French Alps. It wasn’t something I have imagined before, nor seemingly was it something I could properly prepare for.

In all of my training and adventure, I have found that when I push myself beyond what I think I’m capable of, I see a new me, a new layer of who I am. In the midst of the struggle, I get to see how I respond when the pressure is applied. Life is like that, isn’t it? The pressure is there much of the time, but we don’t usually see our true selves until we’re faced with adversity and doubt creeps in.

For the first two days of our ride, we were struggling with what were “warm-up mountains,” getting used to our bikes, the roads and the weather. We were riding on average 40-50 miles per day, not quite Tour de France level but no breeze either. Even with some challenging moments, all in all it was easy riding with people I love dearly. 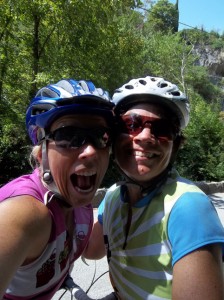 Day 3, though, brought the dreaded Col de la Bonnette. Our ride leader was excited and a little concerned for us and the climb that loomed at the end of our day.

That morning was by far the most beautiful scenery we had witnessed. Water was everywhere, steep canyons, magical bridges and eye-popping flowers lit up the countryside. Our nerves were masked by laughter and sarcasm, as typical with this group of overachievers.

When the big climb started, I could see what I thought was the top. It looked to be a lifetime away. Switchback after switchback kept winding up and up and up. At one point, a mountainside appeared covered in bushes, except they were moving. Closer inspection revealed hundreds of sheep making their way down to eat.

In no race, we would stop, drink some water, wait for the car, have some soda and then start again. At one point, we learned that a 6% grade can feel completely flat. Carlo, our ride leader, kept warning us about the last 800 meters and how steep it was. We were all staying together, stopping if one of us dropped off the back, and anticipating this leg-busting climb he warned us about.

Crawling up the pass, I was thinking about my life, about all of our lives, and how much they are like climbing that mountain. I could stop if I wanted to. If it was too much, I could have just gotten off of my bike and jumped in the car. Each pedal stroke inched me closer but I couldn’t see the top. I had no idea how long I would have to maintain this struggle. I kept looking up but each time I strained to see that far, it would throw my cadence off; I would lose steam and have to regroup. Eventually, I figured that maybe I should just look right in front of me, that maybe I should stop trying to see the finish before I got there. Otherwise, I might just fall right off my bike and then what? How would that help me get to the top? As tough as it can be, I love to practice being in the moment, looking for opportunities to learn more about myself.

As I came around yet another switchback wondering where my peeps were, I looked back at all we had ridden. We were so high, no trees, snow everywhere, it was beautiful and majestic. I acknowledged how lucky I was to have made it this far. Grateful that my legs had delivered me, I could see all the way to the start of our climb. The road was barely visible. My heart, my lungs, my body broken and frail from a decade of fighting blood cancer, yet still I could do this! 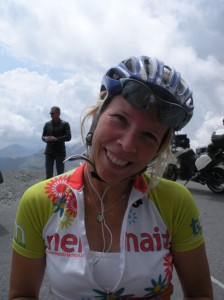 In that moment, I forgot about the finish. I had the wonderful opportunity to see what we had done and it gave me encouragement to keep pedaling.

During some of the steepest climbing, I pulled away from the group. I just wanted to hammer and get to the top. I kept seeing the top, thinking, if I just can keep my cadence, I will make it. I soon found out that the entire time, I was looking at a false summit. When I realized my mistake, the ride changed for me.

Charging away on my pedals I was confident because I had the top in sight. When I found out I was mistaken and that the hardest part of the ride was still waiting, my day turned out to be a much greater test than I bargained for. 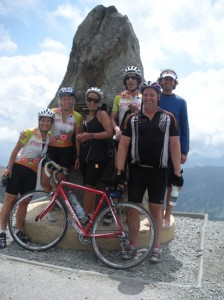 The peloton on top of Col de la Bonette.

When I rounded another switchback and realized that the tortuous last bit of climbing that Carlo had told us about was on, I had to stop. My heart was beating out of my chest and I thought my head might explode. I started again and counted to 30. I had to stop again, I had to regroup and make a choice. Was I willing to go on or would I have to walk my bike up to the summit? What did I want? How did I want to remember the moment and who did I want to be right then?

Having done various events that have pushed my body beyond conceivable limits certainly set me up for that moment but I still had to make the choice. I had to be willing to keep pedaling and let my heart beat so fast that I thought it might pop right out. Without a doubt, this last push was going to hurt.

Yelling at Carlo, I made it to the top amidst cheers from a hundred strangers. Elated to be done and in wonder at the fact that I did it, I took just a few seconds to soak it in, to smile and to put in perspective that climbing this mountain is a lot like life, and I was very glad to be living it.

As I stood on the top of Col de la Bonnet waiting for my friends and husband to arrive, I was elated to know that I had made a choice, that I had pushed myself beyond what I thought I could do.

As I look back, I know I will draw on those moments of not wanting to go on any longer to tackle the mountains that life will put in my path. I can choose to climb them or allow them to stop me from seeing the view from the top. I can keep trying to look ahead and not see what is right in front of me or I can soak up every day taking just a moment to look back at where I’ve been and push onward.

I hope I get the chance to ride some crazy Alp passes again. For now though, I will carry on as a weekend warrior up and down the hills of Santa Cruz County, careful to look in front of me and thankful for the beauty in the hills and in me. 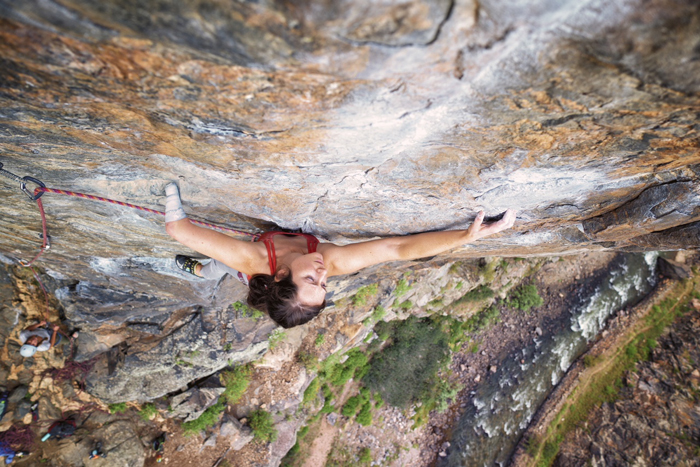 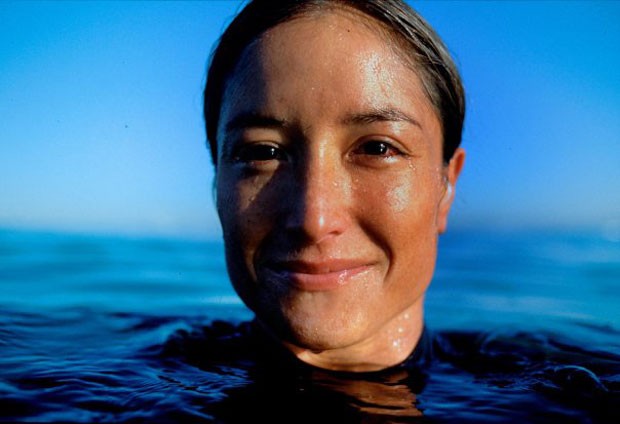 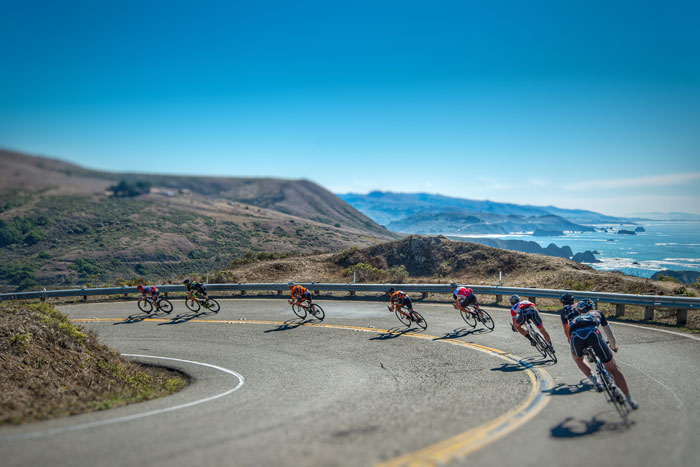