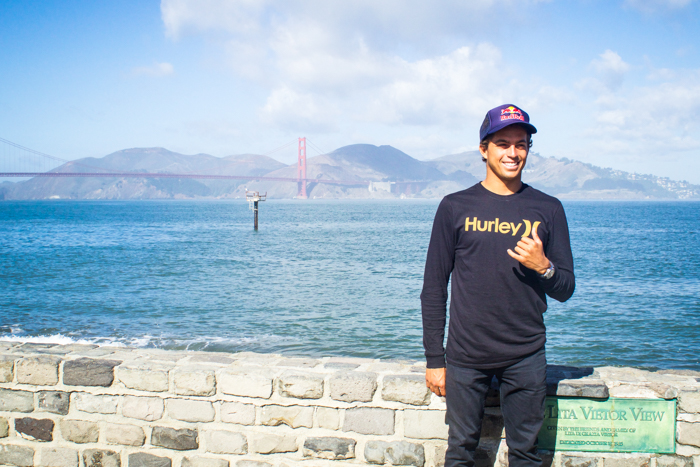 Kai Lenny is an all-around maverick in the ocean. From big-wave surfing, kite surfing, wind surfing, and stand up paddle boarding, Kai is the epitome of a waterman. As a native of Maui his love affair for the ocean is deeply engrained within the Hawaiian culture. Kai’s focus and determination to succeed in hardcore events like October 19’s Red Bull Heavy Water race are apparent to anyone who talks to him.

Kai was one of fifteen of the most elite watermen in the world invited to take on the treacherous Heavy Water race on the San Francisco coast. The entire race is 7.5 miles from the start in the big surf of Ocean Beach, along the dangerous coast line of Land End, and finishing under the Golden Gate Bridge into the San Francisco Bay. Overhead waves, powerful currents, and a difficult race course defines the Red Bull Heavy Water event as a premier test of athleticism from the world’s best watermen.

I had the chance to connect with Kai before the event, and he explained the mental and physical preparation required for this type of competition. He emphasized how, in the ocean, everything is constantly moving. The ability to understand an environment that is in a constant state of change requires quick reactions and lots of endurance. Kai refers to the ocean as the “great equalizer” for its unpredictable nature. You may be the fastest SUP sprinter on the planet, but one 8ft wave at Ocean Beach can leave even the greatest athlete gasping for breath and struggling to get back on board.

Heavy Water competitors have different body types and techniques; each approach to the race is specific to the racers’ strengths and weaknesses. The Waterman League standardized the requirements for the SUP boards at 12ft and under. Kai brought two 12ft carbon fiber SUP boards to get him in and out of the waves at Ocean Beach and all the way under the iconic Golden Gate bridge to the finish line in North Beach. Despite the structural integrity of a 12ft carbon fiber wrapped board, Lenny says one wave at Ocean Beach has the ability to smash a SUP board right in half, so having an extra on the beach is a necessity.

This epic seven-mile race challenged the hand-picked SUP racers from around the world on a playing field that is well known for surprises. Read the Red Bull recap here. 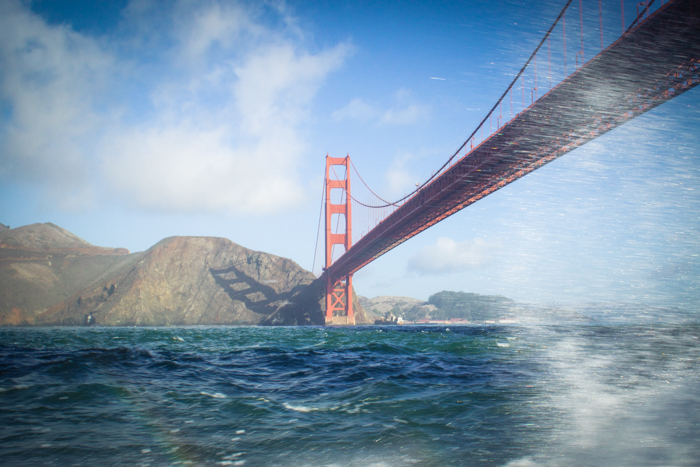 The view of Heavy Water racers as the round the bend from Ocean Beach and pass underneath the Golden Gate Bridge.
Photo: Joe Spota 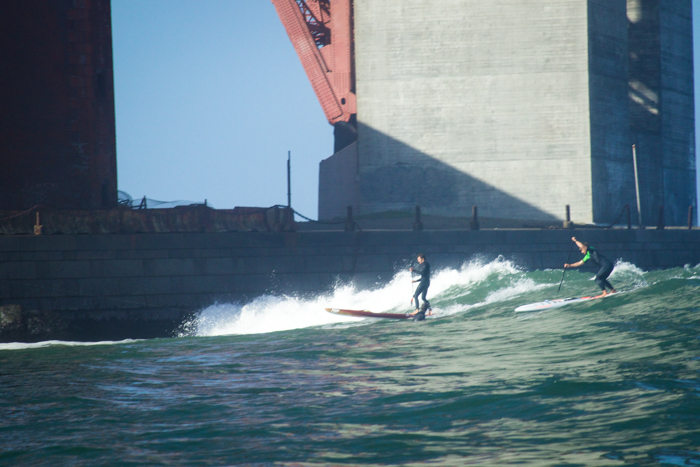 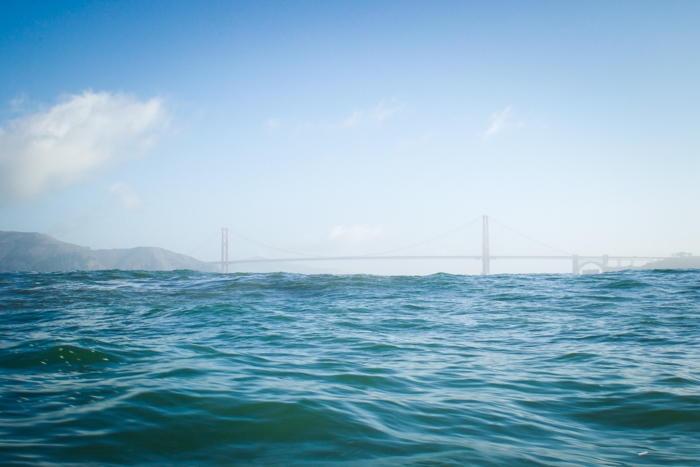 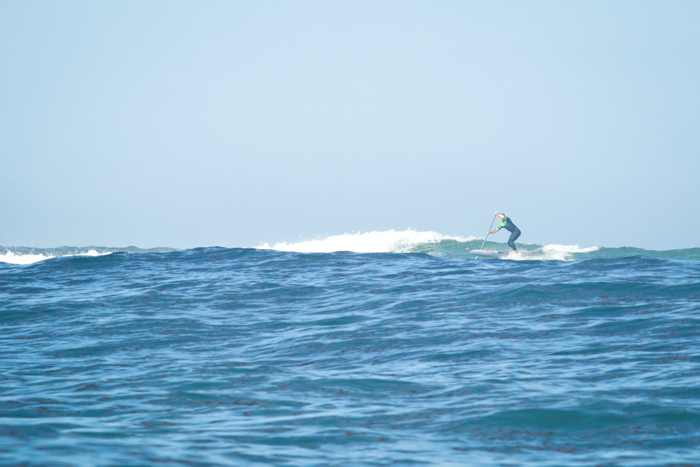 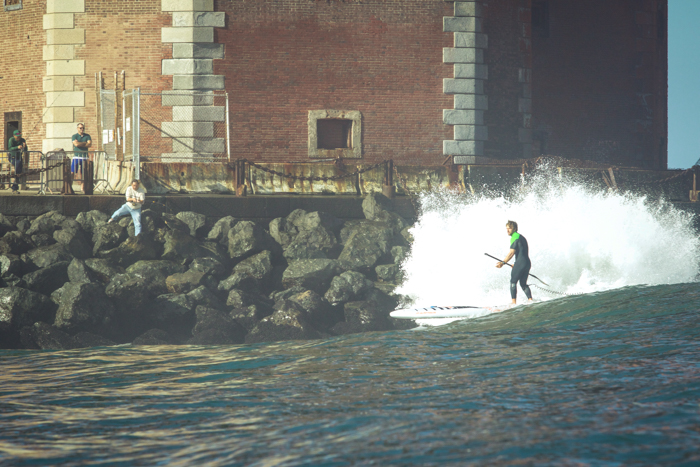 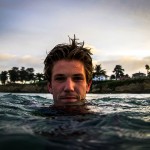 Joe Spota is a photographer and videographer passionate about the environment and the many radical interactions humans can have with it. Whether behind the lens or in the water surfing, his fascination with nature has led him to obtain a degree in Environmental Studies. Joe is looking forward to traveling with his camera, guitar, surfboard and good friends to empty beaches. 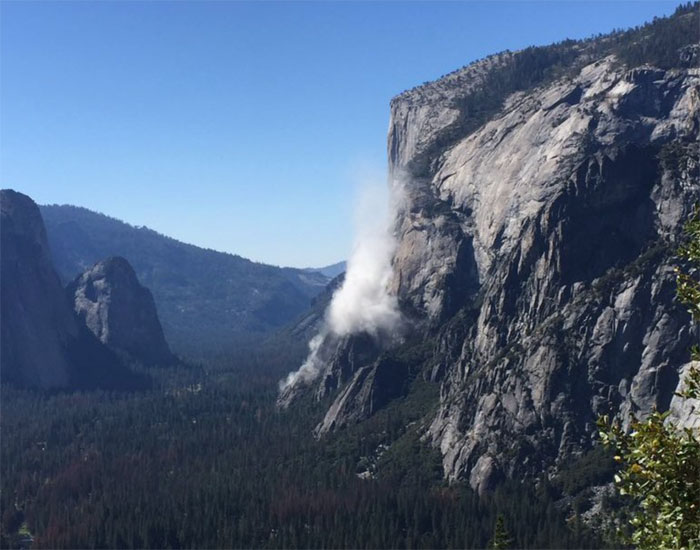 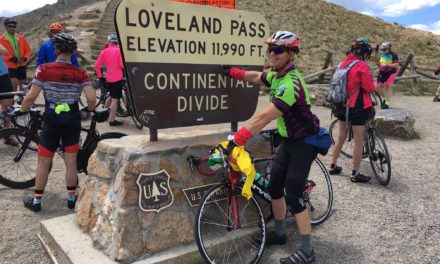 Bike For A Healthy California