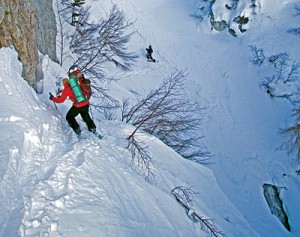 Story and photos by Seth Lightcap

You’re only a virgin once so we had to go big. Especially considering the man of the hour.

The task at hand was to take former Olympian turned pro freeskier Daron Rahlves into the backcountry for his first overnight Sierra ski trip. Now, Rahlves had explored the backcountry near Sugar Bowl on Donner Summit, but he had never been winter camping, nor had he explored the towering peaks of the High Sierra. That all was to change when he accepted my invitation to join pro snowboarder Jeremy Jones and me for an adventure in the Sierra last January.

Of course, Rahlves is one of the strongest skiers on the planet, so despite his inexperience in the skintrack, this was not your average rookie outing. We needed a worthy challenge for the man with a mantle full of World Cup trophies. Knowing the scenery would blow his mind, the ski line a classic, and the approach pain inducing, the pretty lady we chose was the North Couloir of Feather Peak (13,240 ft).

The North Couloir of Feather fit the bill, as it’s no roadside attraction. The steep couloir hangs off the Sierra Crest like a spectacular frozen neck-tie seven miles behind and 6,000 feet above the Pine Creek trailhead outside of Bishop, CA. We had a three-day time window, good weather, and stable snow, so we hoped to summit and ski the line regardless of the suffering. Cinematographers Chris Edmands and Canyon Florey also joined us to document the sweat equity.

To share the story of our trip I’ve presented a handful of images that highlight Rahlves’ rookie experience. Did we sandbag the Olympian with a death march, or did he feel rewarded by sweet success? The photo captions tell the tale. 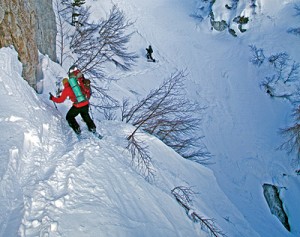 The approach to Feather Peak begins at the abandoned Pine Creek Tungsten mine behind Mt. Tom. Just above the mine the steep drainage constricts into a narrow canyon with holes of open water. The rocky terrain forced us to traverse across an exposed slope right above one of the raging water holes. Florey and Edmands (shown here) led the way through the crossing. With wide eyes, Rahlves sent the crux traverse without flinching. His legs marched a confident step despite the adrenaline in his eyes. No doubt he was used to the feeling of exposure but the methodical nature of climbing left him a longer time to think about it than usual. It was his first valuable lesson of the trip–slow motion situations in the backcountry are often the sketchiest. 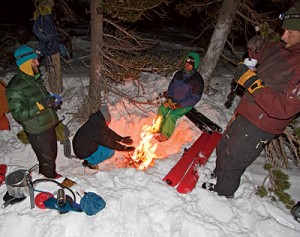 Settling in to warm food and a small fire at our camp was a just reward after the strenuous approach. Climbing the windboard snow up the drainage had proven especially difficult for Rahlves, as his skins were too narrow and provided less than ideal traction. “That was quite the mental fight,” admitted Rahlves with a tired grin when we got to camp. “Climbing was a lot harder than I expected.” Hearing that I had to smile. Were we gonna see Superman suffer after all? Only time would tell. We planned on summiting Feather Peak the next day, but first we needed to get some sleep. The temps that night fell into the single digits. Rahlves’ first night out winter camping would be a bitterly cold one. 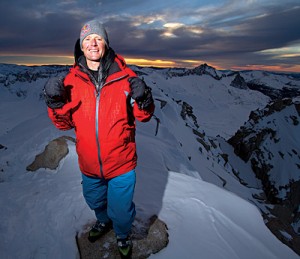 On day two we woke up with the dawn and didn’t stop moving for fifteen hours. The high point of the day was most definitely standing atop the summit of Feather Peak right at sunset. It was Rahlves’ first backcountry summit by leg power alone, and a new summit for the whole crew. Steep switchbacks up the apron, a 1200-foot knee-deep bootpack up the couloir, and 200 feet of fourth class scrambling to gain the summit were the technical lessons of the day. However, the real test was overall climbing endurance. Needless to say, we saw no suffering out of the former World Cup champ. Rahlves had broken trail for nearly half the approach and he was still in fighting form on the summit! 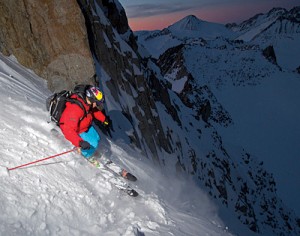 Dropping into the North Couloir our boards sliced into pockets of wind pack mixed with long open panels of glorious shin deep pow. The turns off the top were steep and sweet, though a tad dark. Upon reaching the apron we knew there was nothing in the fall line to worry about, so we turned off our brains in the fading light, and made wide open pow turns with our eyes closed. These blind turns were an out-of-body experience none of us will soon forget. We were flying down the mountain by feel alone. 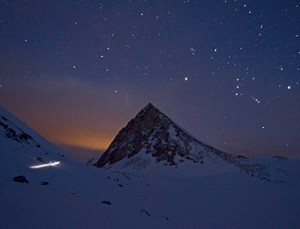 Regrouping in the basin we clicked on our headlamps and began the two-hour tour back to camp. A vivid starscape lit the skintrack climbing back over Co Co La Pass. Dropping off the pass we milked more turns before chasing across several long traverses. Skiing by headlamp didn’t slow down Rahlves as he charged ahead descending the final benches. There was no denying Rahlves had crushed the day’s challenge, and that the strength of his tree trunk-like legs had trumped his inexperience. 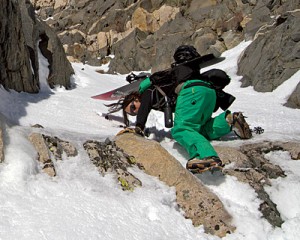 Day three dawned clear and bright so we decided to climb an improbable line right above camp before packing up to head out. The line held multiple rock bands requiring near vertical climbing on the way up and mandatory airs on the way down. Busting climbing moves using ice axes and crampons was nothing new to Jones (shown here), but it was a different story for Rahlves. He had never climbed anything even remotely as technical. Watching him hammer home his first ever ice axe placements was a trip highlight as you could tell he was in awe of the power of the axe, and the potential of the tool for accessing rowdy terrain. 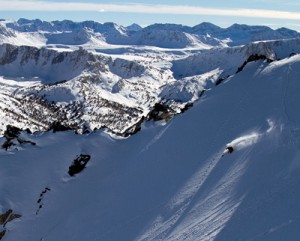 Once again our climbing effort paid us back a hundred fold. The views of the Sierra crest added countless lines to our to-do list and the turns on the way down were tremendous. We ripped pow, wind buff and sun softened cream to within 200 yards of our tents. Packing up to head down to the cars, Rahlves was already fired up for the next backcountry mission. “We’ve climbed and skied way more gnarly stuff than I imagined,” said Rahlves. “The trip has definitely exceeded my expectations. Where are we going next?” Three long days of climbing, two cold nights in a tent, and Rahlves was ready for more. So much for sandbagging an Olympian. This rarefied rookie had led the charge, and opened his eyes to a whole new world of skiing in the backcountry. 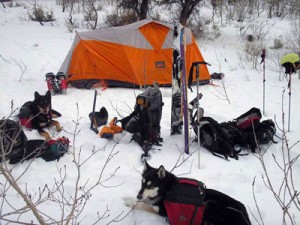 A Diamond in the Rubies 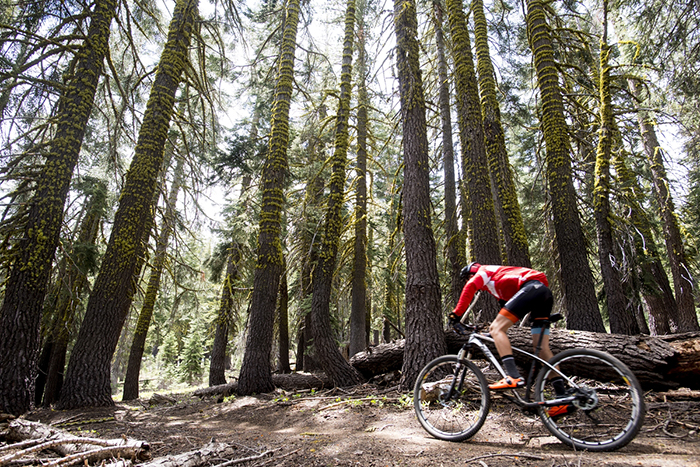 Build It and They Will Come 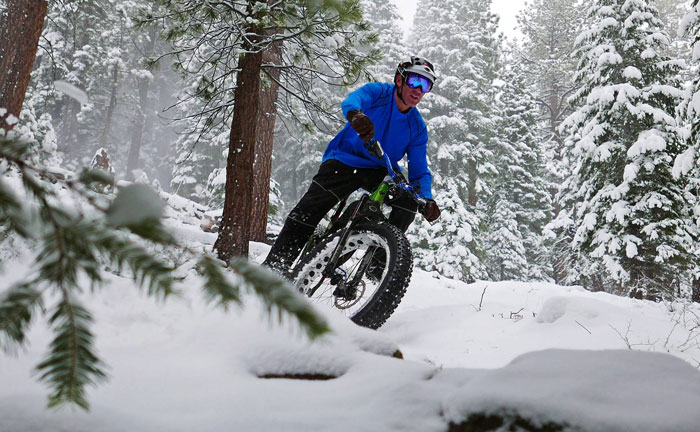 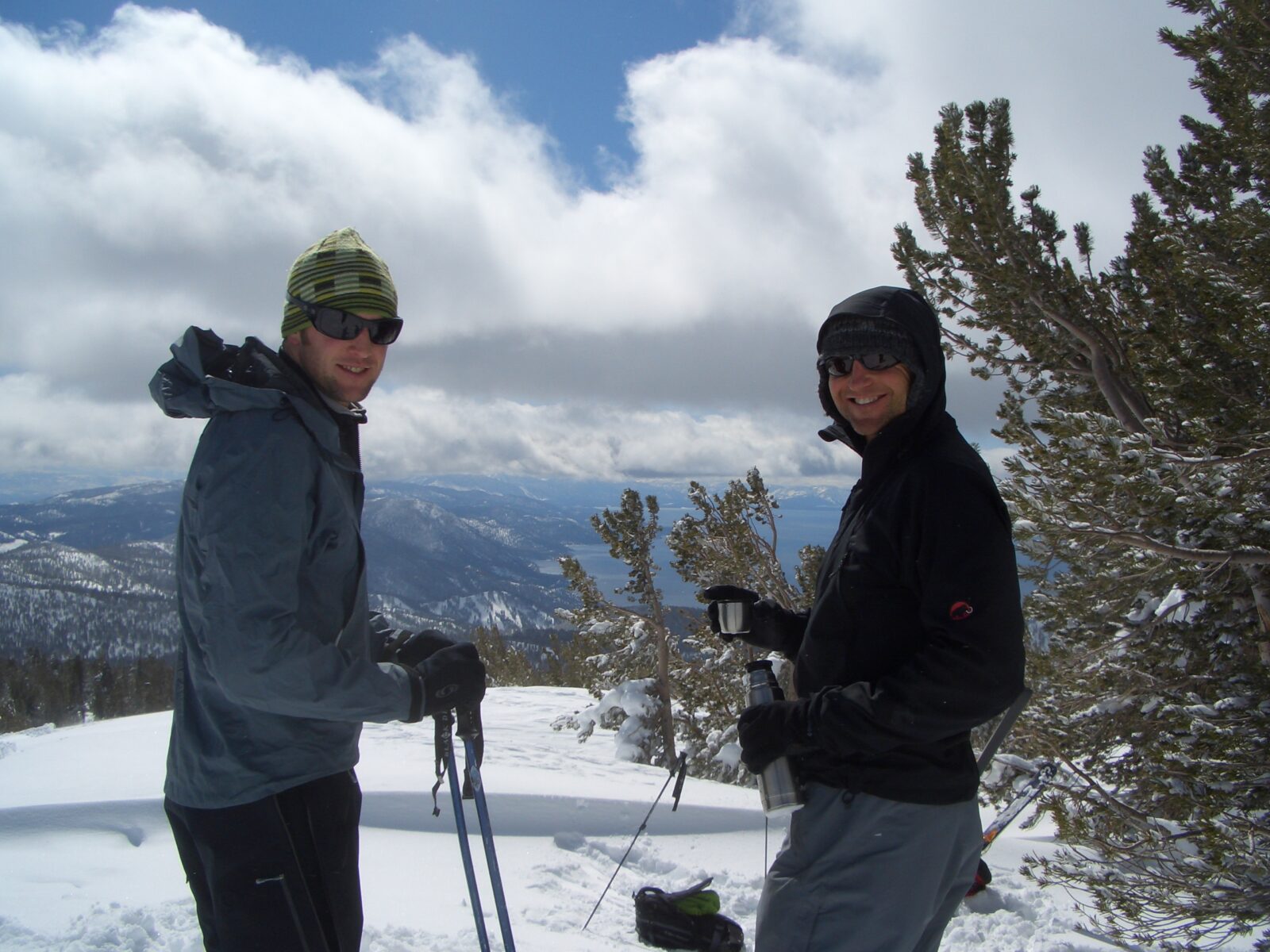