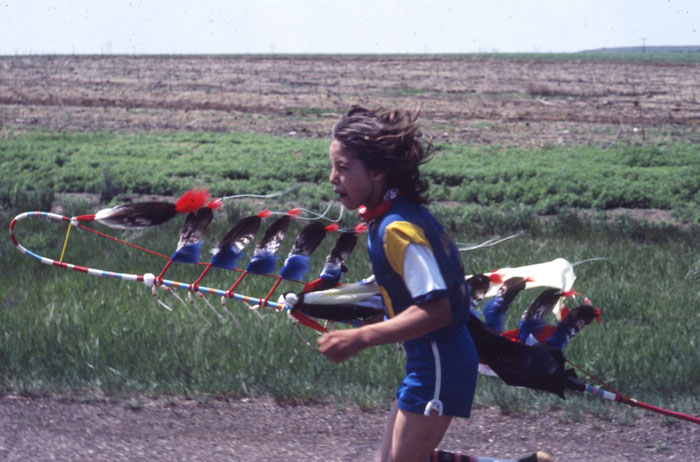 It’s a long drive from Santa Cruz to North Dakota, but we only stopped for food, gas and sleep on our 1600 mile journey. We were eager to join thousands of people gathered on the banks of the Missouri River, half a mile north of the Standing Rock Reservation, to protect drinking water and indigenous sovereignty.
Due to a militarized road block we couldn’t even find the camp.

We pulled in at a gas station outside Cannon Ball just as a white van painted with “Crazy Horse Company,” “100% Warrior Society” and “NoDAPL” disgorged a dozen subdued young men with wild eyes.

“We just came from the front,” a guy named Tyler explained. “A rubber bullet broke my arm.” He held up his bandaged left forearm; an x-ray the next day confirmed his diagnosis. “I had this tear gas mask, so I could breathe OK and I got right up front, but then one of them bullets hit me right in the jaw. Pow! It knocked out a tooth.”

“We come from the Pine Ridge Reservation, in South Dakota,” an earnest, smiling man named Julian Running Bear told us. “We went down to Flagstaff to support this 15-year old kid named Riley Ortega, he wanted to send prayers from his home to here. So we all ran from Flagstaff to Standing Rock to bring his prayers to this place.”

“This place” being the Oceti Sakowin camp. On a windswept prairie, hundreds of indigenous people and thousands of their non-indigenous allies are resisting the construction of the Dakota Access Pipeline, where it would cross the Missouri River, just upstream from the Standing Rock Reservation. Transfer Energy Partners, the company in charge of construction, promised to begin delivering oil to a refinery in Illinois on January 1, 2017. Failure to do so could trigger a contract renegotiation, cutting into corporate profits.

A spill, leak or rupture in that pipeline would dump crude oil directly into Lake Oahe and the Missouri, affecting the drinking water for millions of people. The Pipeline and Hazardous Materials Safety Administration has reported 3,300 such incidents since 2010. That same year, a pipeline spilled more than 800,000 gallons of oil into the Kalamazoo River in Michigan, leading to a clean up effort that lasted years and cost more than a billion dollars. “It’s not really a question of if there will be a spill here, but when,” Marcella Gilbert, a Cheyenne-River Sioux who has been living at the camp since August, points out.

“Of course, originally they planned to put the pipeline north of Bismarck, but that was too close to their water supply,” Madonna continues. “So they re-routed  it here, thinking ‘it’s just a couple of natives, what can they do?’ These people who are building this pipeline, they don’t know who they’re dealing with. They don’t understand how powerful our young people can be.”

A dozen of those powerful young people stood before me at that gas station. Clouds of our breath hung in the air between us as they explained the logistics of their 1,300 mile run, which took just eight and a half days.

“We started with about 15 folks, but by the time we got to Standing Rock there were over a hundred of us,” explained Graham, a Navajo native from Shiprock, who joined the run on its second day.

“We carried sage and corn and a sacred staff more than twenty years old, from my uncle,” explained one of the young freedom runners, Griffin. “We pray while we run. In the past five months, I guess I’ve run almost two thousand miles.”

“These are spiritual runs for political reasons,” explains Marcella, who participated in native freedom runs from 1977-1981. “We ran across the state of South Dakota to support the family of a political prisoner in Sioux Falls. We’d been taught the way we help each other is by sacrificing, so we ran.”

“A lot of these boys never ran before this,” Julian says, with a smile of obvious pride. “Some of these guys had never left the rez before. Some of them spent their whole days drunk. But they’ve been sober this whole trip and they want to stay that way.” He pauses. “We pray together every morning. They’re learning about their heritage and the right way to be. They’re learning the treaty history. They’re asking me to find other runs for them to take part in, for when we go back to the reservation, to help them keep living in a good way.”

Julian hopes to oblige by organizing a run along the boundaries of the Great Sioux Reservation, created by the Fort Laramie Treaty in 1868, and ratified by Congress, making it the law of the land. The Great Sioux Reservation encompasses the entire state of South Dakota west of the Missouri River. According to the treaty, natives are guaranteed “absolute and undisturbed use of the Great Sioux Reservation”, including jurisdiction over who can pass through or settle there. The document is specific about potential renegotiation: “No treaty for cession of any portion or part of the reservation herein described….shall be of any validity or force….unless executed or signed by at least three-fourths of all the adult male Indians.”

“It’s all about the land,” says Madonna, gesturing at the brown rolling hills and bristling tipis of Oceti Sakowin. “People come out here with a lot of different agendas, but for us it’s always been about the land. Our ancestors are buried here. We come from here. We grow up here. This isn’t about climate change for us, it’s about the place we call home. The land is all we’ve got. We don’t have anything else left.” 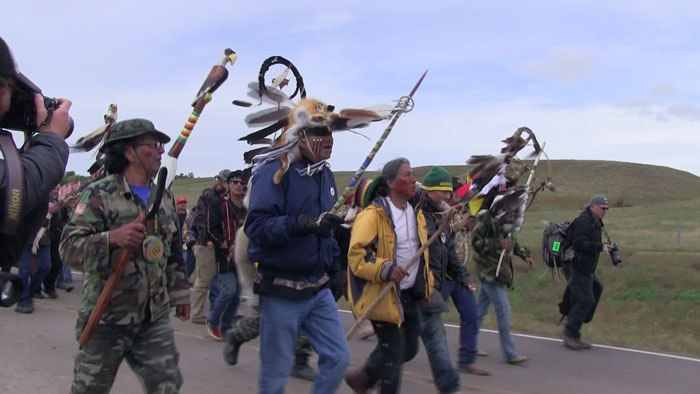 What can a reader of Adventure Sports Journal do to support Oceti Sakowin?

Every native person to whom I posed this question had the same response: “Come to Standing Rock!”

“Come with a skill,” suggested Marcella Gilbert. “We need lawyers, law students, folks with medical or legal training, doctors and medics.” Help is also appreciated in the communal kitchen, chopping wood and with carpentry to prepare shelters for the bitter cold winter months.

“Come for the long haul,” says Madonna Thunderhawk, Marcella’s mother. “We need folks who are willing to risk arrest.”

“Come willing to help out and be willing to follow instructions,”  continues Marcella. “Don’t just show up and expect to be taken care of. Don’t expect a warm place to stay unless you already have connections here.”

Every indigenous person I asked discouraged tourists, folks coming for a couple of days to snap photos and check out the scene. “If you don’t want to help out, what are you doing here?” was a common refrain.

If you can’t afford the time to come visit, cash donations to the Standing Rock Sioux Tribe are appreciated. Donations can be ear marked for porta potties, dumpsters and propane, which are the greatest needs at camp. 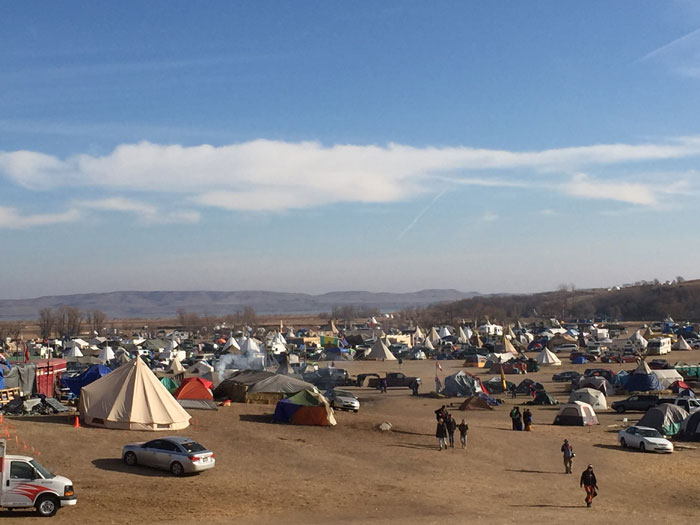 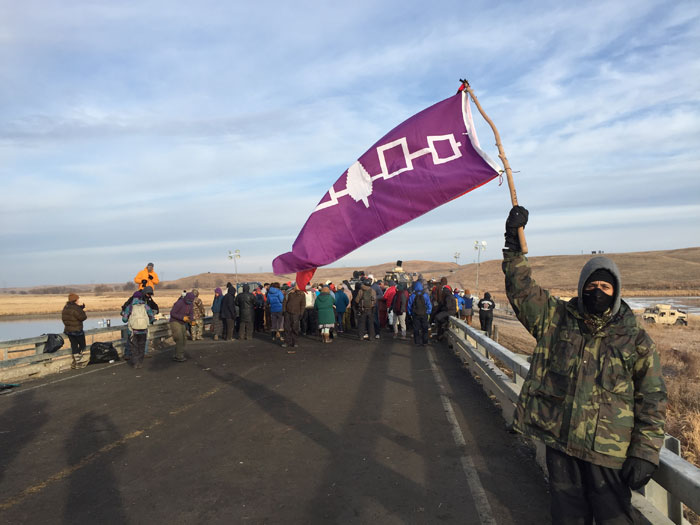 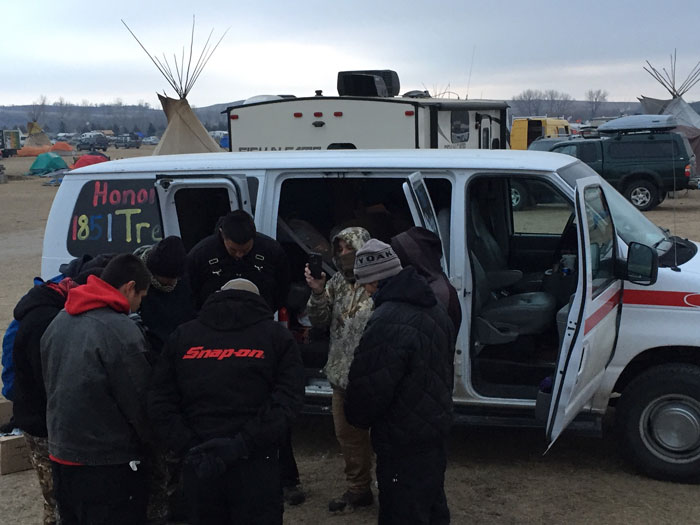 Pine Ridge Runners praying together before heading to the front lines (Leonie Sherman). 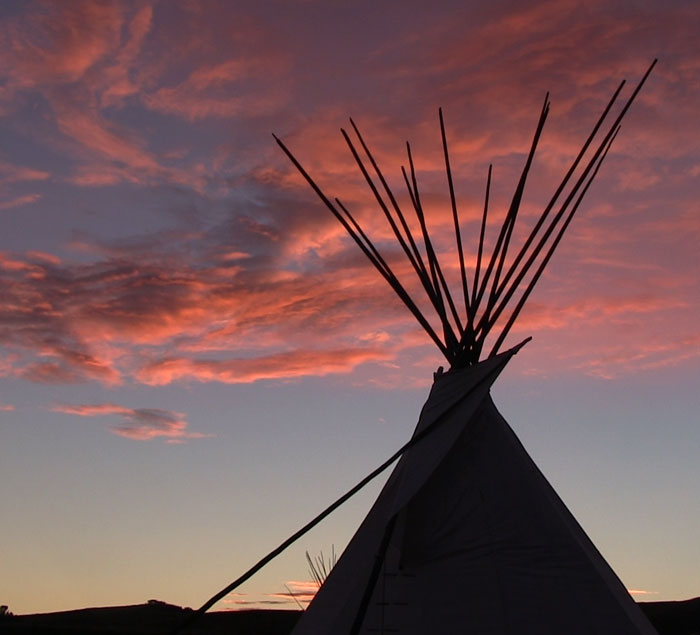 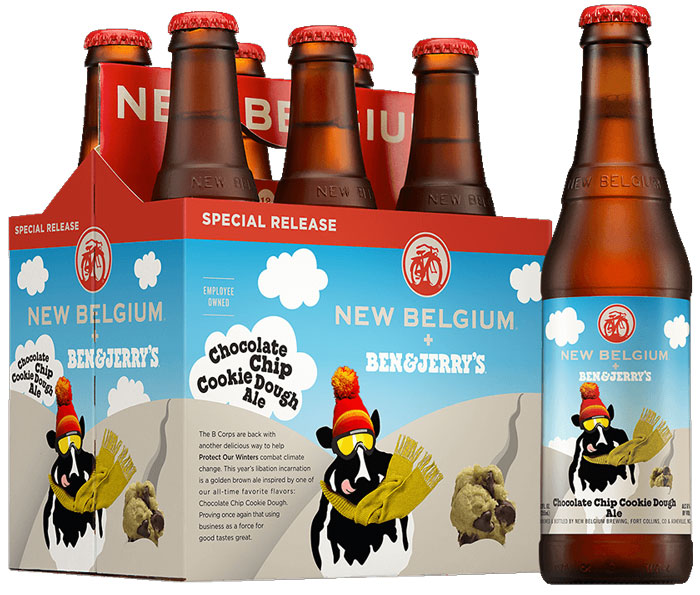 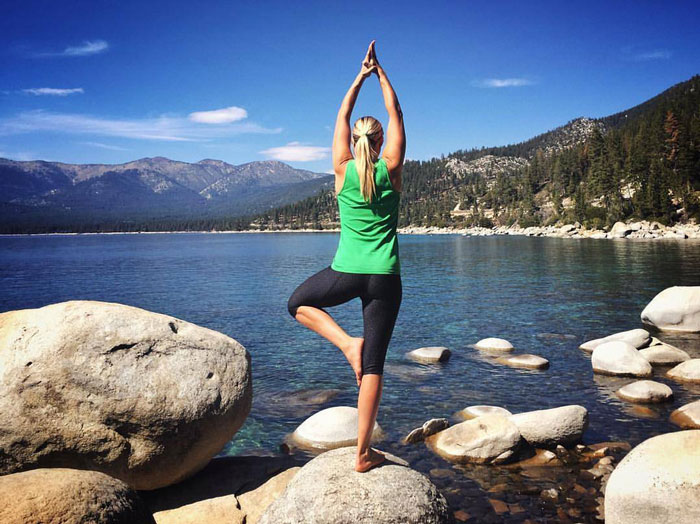 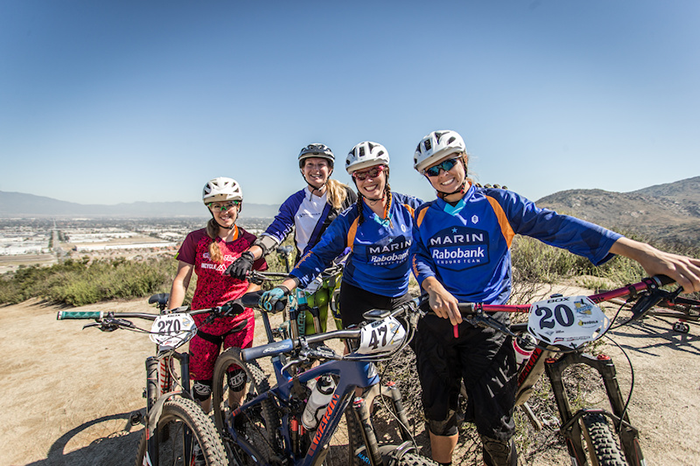 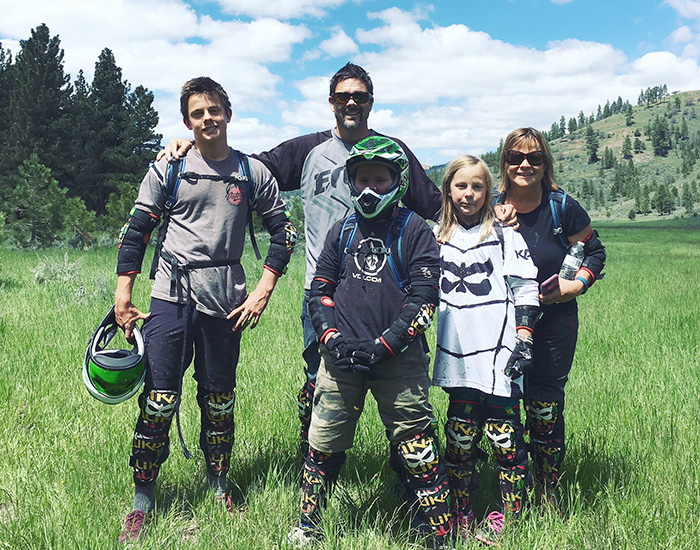 Editor’s Note: A Ripple in the Force