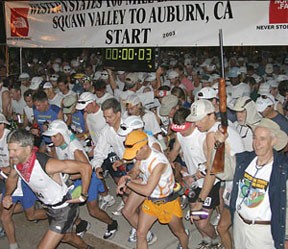 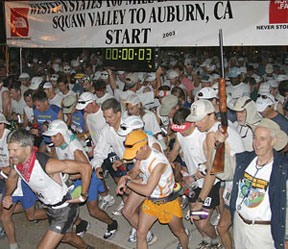 How a lame horse kickstarted the Western States Endurance Run, the oldest 100-mile trail race in the world

It began as a race that was questionable even for a horse, let alone runners. Altitude, rugged terrain and temperature fluctuations that swing from near freezing at the start to furnace-like temps topping 100 degrees by the afternoon exact their toll. More than one-in-three runners drop out.

Add in a combined elevation gain and loss of 41,000 feet, and Outside magazine called it the toughest endurance event on the planet.

It is the Western States Endurance Run, the oldest 100-mile trail race in the world and arguably the most contested, held annually the last full weekend in June. This year, the 38th running since 1974, takes place June 25-26.

Its infamy has made the Western States 100 a household name in the ultrarunning community and beyond. Its course — from the base of Squaw Valley to the Placer High School track in Auburn — follows some of California’s most rugged mountainous terrain.

Western States began as a challenge to see if the modern horse could still cover 100 miles in 24 hours as it did in the days of yore. In 1955, Wendell T. Robie,an Auburn businessman and equestrian, set out with a pack of five riders intent on traversing a section of the Western States Trail, a system which connects Sacramento to Salt Lake City through the Sierra Nevada.

Originally carved and traveled by the Paiute and Washoe Indians, it later became a well- worn route of ‘49ers on their journey west. Robie’s expedition succeeded; the Western States Trail Ride — also known as the Tevis Cup Ride — was born.

But the real story began in 1974, when Gordon Ainsleigh, rider of a perpetually-lame horse, decided the heck with it, he’d do it on his own, and under the same 24-hour time limit as an equine. And so he set off, coming through the finish in 23 hours, 42 minutes, thereby building the framework for the footrace’s 24- hour completion goal and proving that he was, in essence, as good as anything on four legs.

The following year another person attempted Ainsleigh’s feat; the year after that, someone succeeded. In 1977, fourteen people toed the starting line amid horses and, most likely, a sizable amount of horse droppings, leading organizers to reschedule the burgeoning event a month prior to the horse race in 1978, complete with aid stations and medical checks staffed with doctors instead of veterinarians.

Western States popularity has long-since maxed out its soft cap of 370 participants. Today a prospective runner must not only qualify by time with an accepted 50-mile race, but also entrust themselves to lady luck with a lottery system.

“It’s the granddaddy of endurance events. It has that special stature of being a Boston Marathon, a Wimbledon in tennis, a U.S. Open in golf, because it was the first,” says John Trent, president of the Board of Trustees of Western States, explaining the demand.“Anybody who toes the starting line, they’ve prepared to an unbelievable degree. You can almost fake your way through a marathon, but 100 miles? It’s a completely different animal.”

Trent became involved with the race in 1996, when as a newspaperman in Reno, he was sent to profile a competitor in the race. Proof that all editors are sadistic, he was assigned to run the final 38 miles of the race with his subject, an experience that would change his life.

A decent recreational runner, Trent says, “I guess I was looking for a little bit of a different challenge. I felt like I’d maxed out on how fast I could go on shorter distances. It was a natural progression, to go from the roads and get into the ultramarathon world.”

You have to wonder: Wouldn’t the first year’s experience be enough, and then with every year following, to save time, repeatedly hit yourself in the lower limbs with a hammer?

Trent says his continued return to the race is typical of the kind of following Western States breeds among runners. “They decide that they like the low-key nature of these events, where you can be challenged, but not have to worry about great expectations, other than the expectations of yourself.”

Trent’s accomplishments, notable as they are, pale when compared to Auburn local and Western States’ legend Tim Twietmeyer. Despite being a guy who’d “never really run in college,” Twietmeyer heard about the race in the early 80’s during its initial buildup of notoriety. Since his first year in 1981, he has completed the event a staggering 25 times consecutively, all below 24 hours, which remains a standing record, and winning the event overall five times.

With the time he’s spent training and racing near his home, Twietmeyer knows how special the area is. “Even though you might be in California the whole time, you’re going through so many different ecosystems it can be pretty interesting to follow,” he says. High alpine, river drainages, foothills; one is certainly never at a loss for things to look at.

As important as the Western States is to him, Twietmeyer sees the race as an equally important part of the community. “The race itself brings in a huge amount of interest in Auburn and Squaw Valley,” he says.

When wildfires necessitated organizers to cancel the race in 2008, Twietmeyer notes, “It really hit hard on some of the local vendors who are counting on the weekend to be full, whether it’s the restaurants or motels.” The race also hosts several open-to-all training runs throughout the year on the Western States’ course, which provide an introduction for future participants as well as a boon for the local economies. “It’s a pretty big financial impact,” he says.

While Twietmeyer says he’s currently on hiatus from competition, he remains a vital part of the race as a Western States Endurance Run Foundation Board Member, helping to shape the race’s future.

“I wish we could start two- or three-thousand people, [but] the remoteness of trails just doesn’t allow it,” he says. “Rather than create a big event that’s a mess, we’d rather keep the quality there. The 375 or 400 that start have the same experience as people 10, 20 years ago.”

The biggest move forward for the race, he believes, has to do with how the participant spots are allotted. Though nothing has been decided, the discussion revolves around opening it up to some first-timers, sans qualifying time, while reserving spots for the elite competition. This reflects Twietmeyer’s  favorite part of running races: “There aren’t too many sports that allow the common guy to be shoulder to shoulder with the superstars,” he says.

But for the everyman, it’s still the adventure of the race that beckons. Karyn Hoffman, 48, of Folsom, entered her first Western States in 2005 after years of road marathoning had lost its luster.

“I was stoked and scared to death,” she says about when she found she’d been selected. But pragmatic as any ultrarunner, she asked herself, “How do you do a hundred miles? Well, how do you eat an elephant?”

Hoffman has now “eaten” four elephants, completing the storied course four times in as many years, and is busy training for her fifth. The community that has grown around the race keeps her coming back, as do the vistas. “The beauty aspect where we’re running here in the hills of Northern California is just amazing,” she says.

That’s primarily what it comes down to: there’s pleasure in the pain of running the Western States course, which has little to do with masochism. Man versus mountains beckoned the founders of the race, and they were rewarded with the beauty of the course.

Every June a select group returns to challenge the terrain, their bodies and their will.
“For one day, you know you are the center of the running universe, and there are a battalion of people out there that are going to get you to the finish,” Trent says. ‘It certainly is hellish, but you experience heaven.”

•    Tim Twietmeyer of Auburn completed the race a record 25 times, all in under 24 hours, winning five times.

Jon Gugala is a runner and freelance writer based in Santa Cruz. 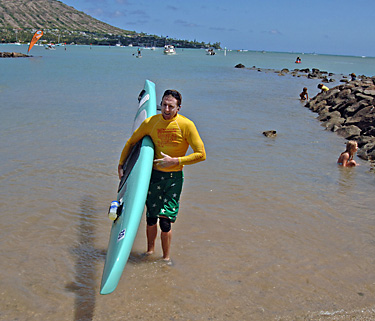 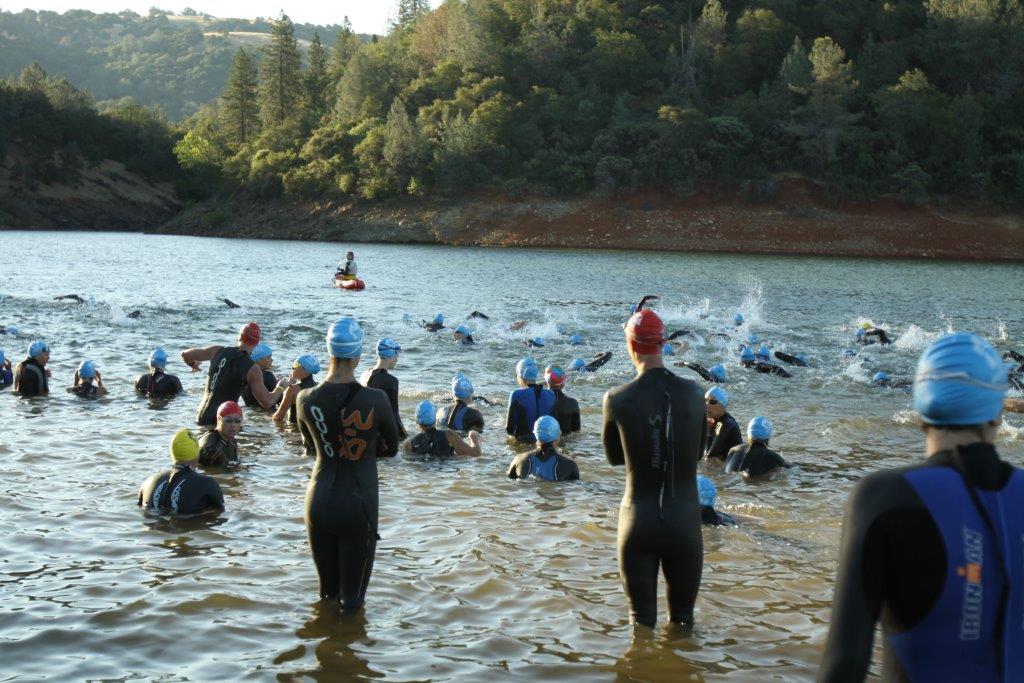 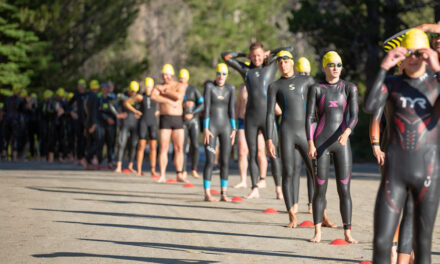 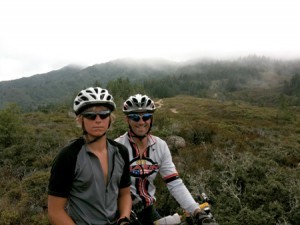 The Family That Tris Together