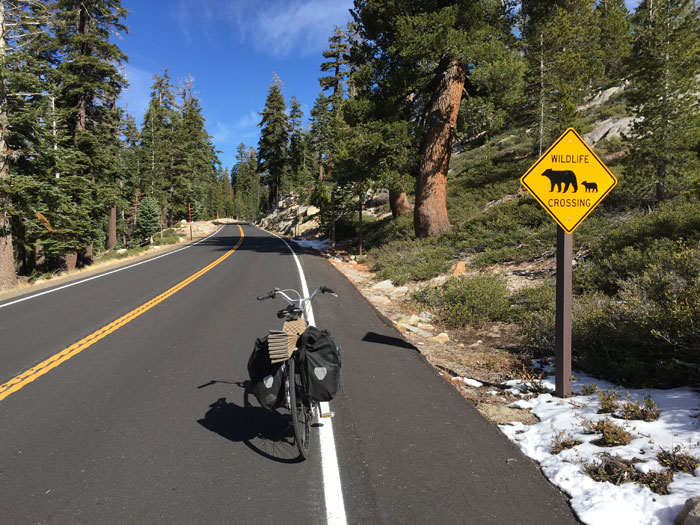 Exploring Yosemite in the shoulder season

Words and photos by Leonie Sherman

The next time you’re stuck in traffic at the Tioga Pass entrance to Yosemite, pause for a moment to consider that without the ingenuity of Stephen T. Mather, the first director of the National Park Service, you’d be walking. If the wait is long enough, or nostalgia for a french-fry-free Tuolumne Meadows washes over you, just wait until October 15th and grab your bike.

After mid-October the Tioga Road is closed to overnight parking between the pass and Crane Flat, but a visitor can lock their bike at any trailhead and take to the back-country for a dose of rare alpine Yosemite solitude.

The shoulder season cyclist needs to be painfully aware of the immediate weather forecast. Overnight parking is prohibited to prevent cars from getting stranded by early snow. The precise date of that first storm varies widely – in 2004, snow buried the high country on October 17, but only eight years later the road was open until mid-January. Over the past three decades, the road has closed 19 times before mid-November. The window is short, so start planning now. Check the weather with religious fervor. Nobody wants to push their bike through miles of Sierra cement.

Even in autumn, a permit is required. Yosemite Valley wilderness centers are open year-round, but entering from Tioga means self-registration. In summer a permit allows one night at a front country campground at the beginning and end of a backpacking trip. In October the campgrounds are closed to automobiles, but a cyclist can easily bypass the gate and sleep there. This is a fuzzy area in Yosemite regulations, but with an outhouse, bear box and trash cans, sleeping at a campground is obviously the lowest impact camping around.

Starting at Tioga Pass allows instant access to the high country and a glimpse into the history of this spectacular road. Biking from the entrance station to Tuolumne Meadows takes less than half an hour. Natives passed through these meadows to trade with their neighbors as early as 2,500 BC. Their route, the Mono Trail, started in Yosemite Valley and followed the course of today’s road past Tenaya Lake and into Tuolumne Meadows, where it crossed the crest at Mono Pass and headed down Bloody Canyon to Mono Lake.

White men didn’t venture into the meadows until the 1850s, when Lt. Moore and his battalion pursued Chief Tenaya and the remnants of his tribe across the Mono Trail. The natives managed to escape execution and white people stumbled upon the largest alpine meadow in the Sierra. In 1864 Congress granted Yosemite Valley and the Mariposa Grove to California as a natural preserve; the rest of Yosemite National Park was added in 1890, thanks to the tireless dedication of John Muir and Robert Underwood Johnson. 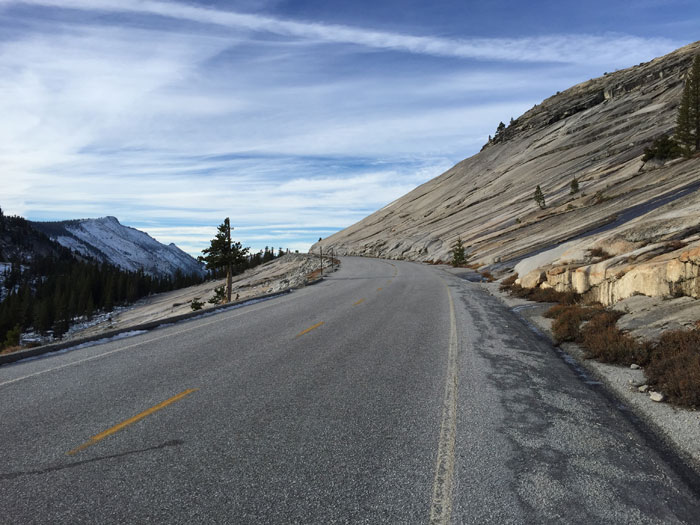 Before Europeans came to the Yosemite high country for recreation, they swarmed the area looking for silver. From 1878-1884 the area just north of Tioga Pass was overrun with miners, engineers, merchants and mule drivers. A route suitable for wagons or a railroad was surveyed in 1882 and completed in 1883. The mine folded ten months later and no ore ever traveled the Tioga Road. From 1890-1915 the road was privately owned, and maintained in a haphazard manner by the concessionaires that sprang up along its edges to serve travelers.

But in 1915, Stephen T. Mather foresaw the advent of the automobile and wanted to ensure public access to Yosemite’s high country. He got legislation passed allowing for a gift to the government like the Tioga Road and then persuaded his wealthy friends to purchase the right of way. He made up the difference from his own pocket. Since he was a government employee, he couldn’t make the donation himself, so he arranged for the title to be transferred to a friend, who then donated it to the Park Service.

The remnants of the Great Sierra Mine responsible for the Tioga Road are perched on the Sierra crest at 10,670 feet, a two-mile walk from the Tioga entrance station. Saddlebag Lake is a short cross-country jaunt away and provides an excellent base to explore the glaciers and peaks of the Hall Research Area and Hoover Wilderness. Returning along the Saddlebag Road and back to Tioga Pass allows the possibility of catching a ride back to a bike and makes an excellent low-key loop.

Another excellent loop, normally swarming with happy hikers, starts at the Tuolumne Meadows Visitor Center. Cathedral Lakes are only a few miles away. Camp there and devote a day to clambering around on the fourth class routes of nearby Echo Peaks. From the lakes, head south past the gleaming granite of Tressider Peak and Columbia Finger before arriving at Sunrise Lakes. Continuing southwest for six and a half miles brings a hiker to the junction for Clouds Rest, a few miles north. John Muir said this was his favorite spot in the Sierra to watch the sunset. One magical night in late October, I slept on top of Clouds Rest to watch the  full moon rise over Half Dome and Yosemite Valley; the sun streaked the sky orange and magenta before fading to indigo. From Clouds Rest, the glittering shores of Tenaya Lake are about seven miles away. Follow the trail that parallels the road back to a bicycle.

Approaching from the west side, several backpacking loops are possible out of White Wolf. Ten Lakes Basin, situated around 9,000 feet, is about a ten-mile hike from White Wolf. From there a further 13 miles of trail brings you to the south fork of Cathedral Creek, past Tuolumne Peak to the Polly Dome Lakes. Four miles north is Glen Aulin; from there a late season hiker can follow the Grand Canyon of the Tuolumne to Pate Valley and climb out to their bike at White Wolf. This loop is about 50 miles and should only be attempted with high pressure and a sunny forecast. A less ambitious loop from White Wolf takes in Smith Meadows with a possible excursion to Smith Peak before heading south to Aspen Valley and returning to a discreetly parked bicycle. 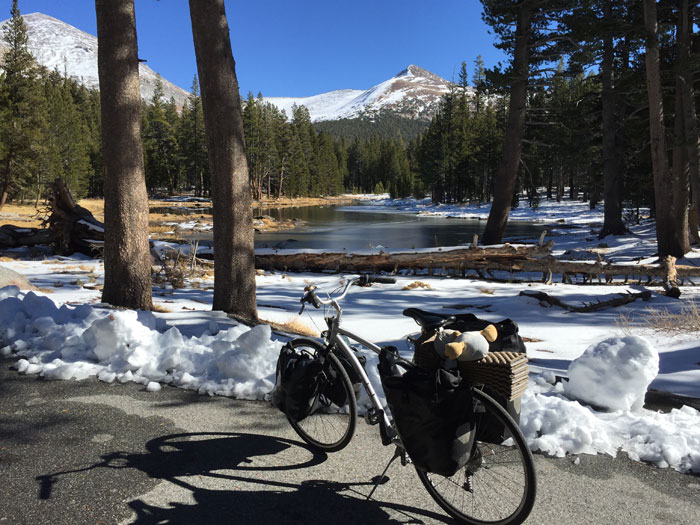 Late-season Tioga-bike-assisted backpacking presents limitless options. Rangers are long gone, the stores are shuttered and the Sierra High Camps lie abandoned in the crisp autumn air. The grasses of Tuolumne Meadows are brittle and yellowing, but waterfalls still flow over granite domes. Shallow puddles may have a skin of ice, but lakes and streams remain open until weeks of hard freeze seal their fate for the season. Squirrels and birds frantically secure their winter caches, while black bears are settling down for a long winter’s nap.

Watching the season turn in the high country is a privilege, but a late season bike-backpacker needs to be mentally prepared and entirely self-sufficient. The days are warm, but the nights last twelve hours and often dip below freezing. Bring a friend or a good book, plenty of fuel and food and extra warm layers. Borrow an expedition weight sleeping bag. Understand the risk involved and enjoy every moment of stillness and solitude, the most rare and precious of commodities on a crowded urbanized planet. 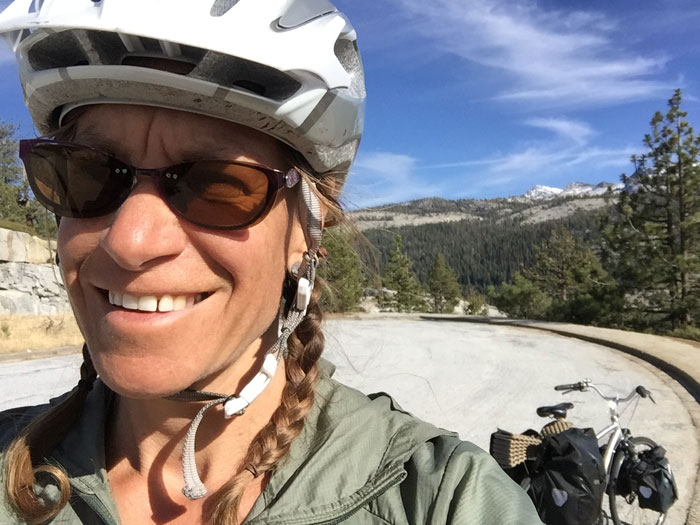 No tourists at Olmsted Point so the author had to take a selfie! 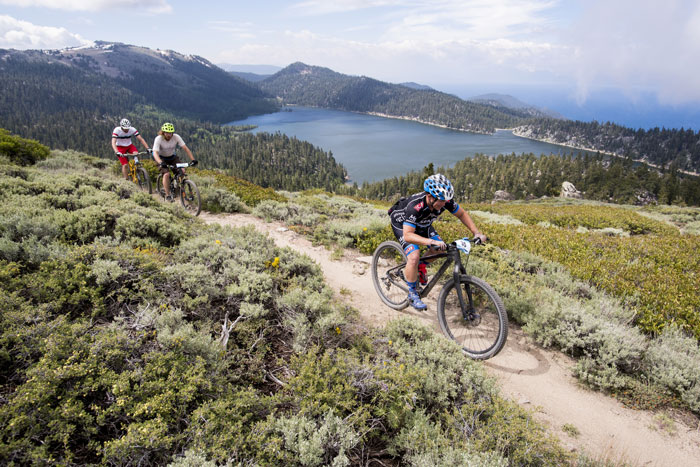 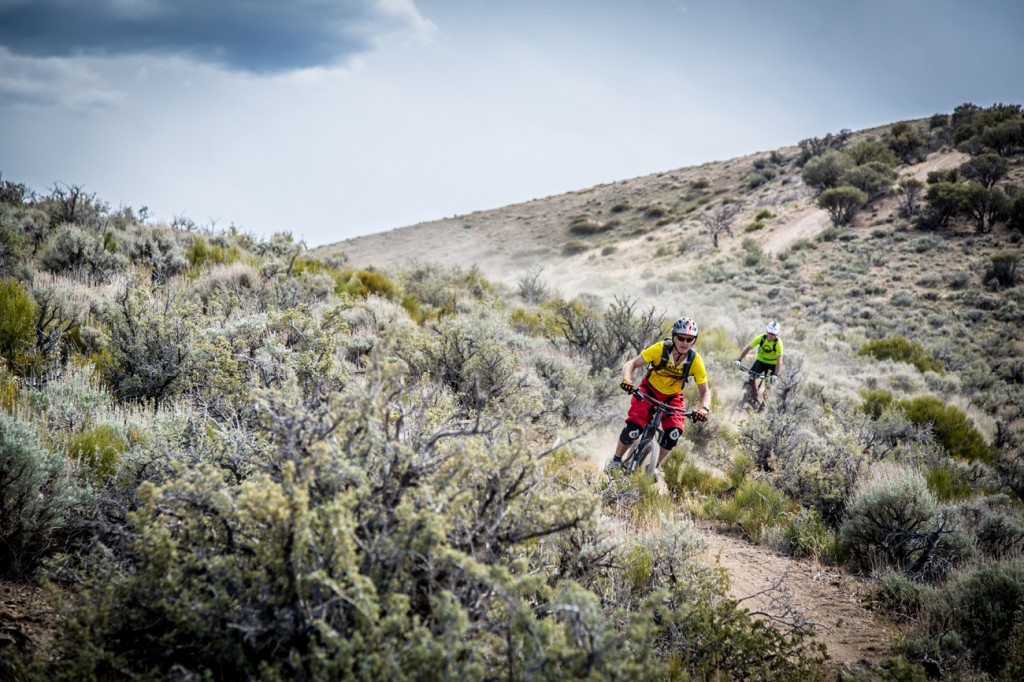 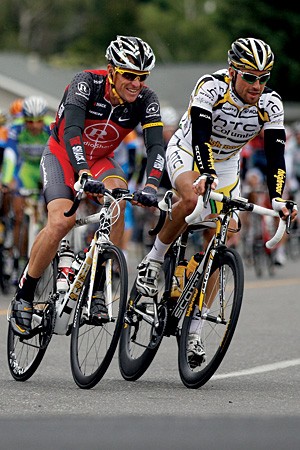 Amgen Tour of California: A High and Mighty Course 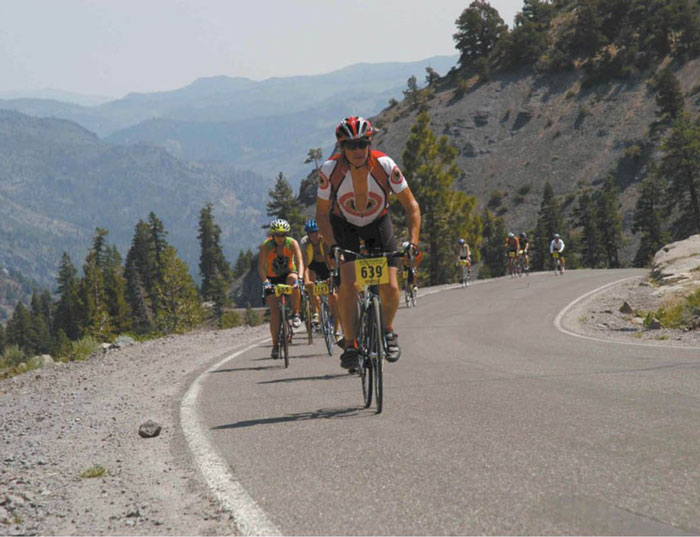